Mobile smartphones and tablets are often thought of as living in their own protected bubble in the consumer electronics world, with users believing that those devices exist in their own class. Whilst there isn’t isn’t anything fundamentally wrong with that thought process, it is also extremely important to treat our mobile hardware as a portable computer and therefore protecting them and locking them down as such. Android smartphone users can now drastically enhance the protection afforded to their devices by using the relatively new SecDroid app.

The majority of Android users should be well aware of the potential risks they face when downloading and installing apps from the Play Store or any other location, especially those that come from unknown or independent development houses. Various studies and reports have already shown that an increasing amount of Android apps contain malicious code, trojans, viruses and rootkits that are primarily designed to infect the file system and run unverified processes to retrieve sensitive information without the user’s knowledge.

SecDroid is an app that may not be the definitive answer to all potential security risks but it certainly goes a long way to appeasing those Android device owners who may have security concerns. Developed by an Android community member known as x942 SecDroid is described as software that hardens the Android kernel by disabling specific binaries that are capable of accessing the internet and could therefore be potentially exploited by an attack vector.

The SecDroid app definitely comes with a far few advantages and disadvantages attached to it. The installation works by disabling things like SSH, SSHD, TelNet NC and Ping services. Disabling those individual access points on the device will certainly limit the potential for third-party attacks through a remote terminal, but it also has the potential to prevent already-installed and trusted apps that require access to services from working. There is definitely a cost-benefit analysis to be ran by each individual user before going ahead and installing and using SecDroid. 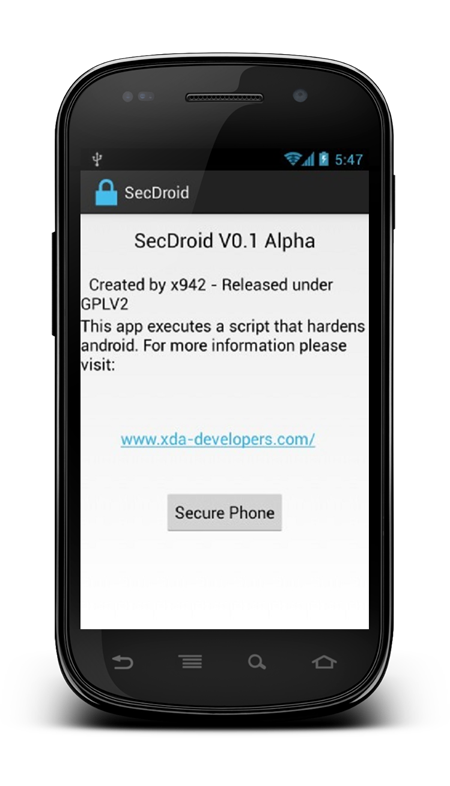 The app is currently being actively worked on and has been released under a GPLv2 license for those who are interested in inspecting the code and seeing if they can help improve the service.