Jailbreak Legend Geohot Talks Us Through Hacking A Computer [Video]

Have you ever wondered about the exact processes and steps that security researchers and computer hackers take to gain access to a target computer or device?

If that particular area of computer science is of interest to you, then you may take a particular interest in a new five-minute hacking lesson that shows George Hotz walking and talking through the necessary steps involved in gaining access to a laptop connected to a Wi-Fi network. 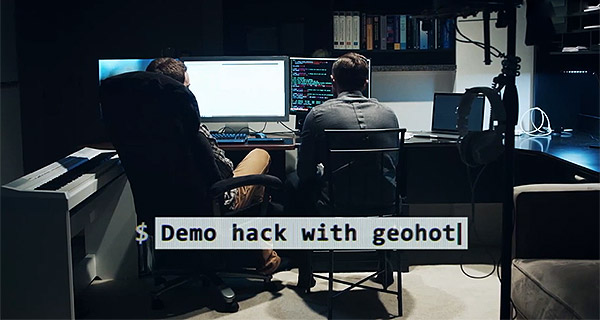 The video, which was created as part of the Viceland Cyberwar series, doesn’t go into hugely intricate details, but does give a good insight into the mindset of a malicious individual.

The demonstration video shows George Hotz, famed for being the first man to jailbreak an iPhone and for also going head-to-head with Sony for jailbreaking the PlayStation 3, placing a laptop on his local Wi-Fi network, the hacker and autonomous car kit creator then explains that the machine may only be connected to his local Wi-Fi, but a hack is workable just as easily even if it’s remotely connected to the Internet. That laptop also has a vulnerable piece of software installed on it to allow the demonstration to take place.

As you can imagine, all of the necessary components of the hack are conventionally placed for the purpose of the demonstration, but it’s not uncommon to find machines running vulnerable software in the real-world.

In the example shown in the video, Geohot managed to exploit the vulnerable software on the Wi-Fi connected laptop with just 65 lines of code. In reality, the whole process would take a lot longer than five minutes, and would involve building a solution that is a lot more sophisticated than the one demonstrated with popping browsers and apps. After all, you really don’t want to be popping up web browsers and calculator apps on the hacked machine, as Hotz himself admits:

If I was actually targeting someone, I wouldn’t pop up web browsers letting them know that I’m there. I have a shell. I can navigate around their computer, see what’s on it, without them even seeing anything. That’s the key.

Check out the video for yourself. Would you like to see Geohot involving himself in the jailbreak game again to make use of these skills? Or would you prefer him to hurry to market with his autonomous car kit solution as part of his Comma.ai venture?