The second beta version of iOS 6 – currently only available to registered developers – has just landed, and thanks to Dev Team’s Redsn0w, it can be jailbroken already on A4 devices like the iPhone 4, iPod touch 4G, iPhone 3GS. Of course, the jailbreak is tethered, which means you will need to connect your device to a computer with Redsn0w installed each time your device is turned off or rebooted, but you knew that already.

We have tested and can confirm that the current Redsn0w 0.9.13dev2 works with iOS 6 beta 2. You will need to "point" Redsn0w in the direction of your older iOS 6 beta 1 firmware in order to spoof the jailbreaking tool into freeing up your device, but keep in mind that you have to use Redsn0w 0.9.13dev2 for the process, links at the end of this post. The process is none too difficult, and we expect you already know what you’re doing, however for those who haven’t followed the process through in the past, please check out the link to our previous tutorial, by simply heading over to the link at the end of this post.

iOS 6 has quite a few new treasures for iPhone, iPad and iPod touch users, but no matter how much research Apple does, there are still many glaring oversights within the software as a whole, which is one of the main reasons why the jailbreak community continues to thrive.

Not only has Cydia offered most of the upcoming iOS 6 features for years now, but most of the new features have already been ported through to those running the older firmware. For example, thanks to a little search through Cydia, my device already has the Notification Center tweet widget, and most of the other niceties from the WWDC announcement have been picked off the new firmware like a scavenger hunt.

Still, those running the dev-only release iOS 6 can now enjoy the best of both worlds by jailbreaking their newly-updated devices, and although iOS 6 beta 2 isn’t a spectacular update by any stretch of the imagination, it’s worth downloading and keeping up with the progress of Apple’s latest, supposedly greatest iteration of the iconic mobile operating system. 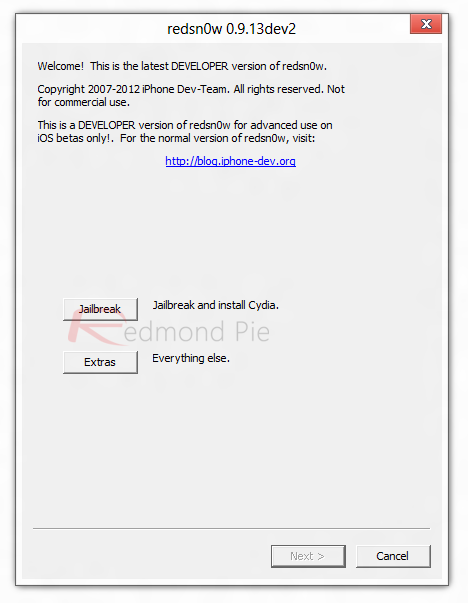 It is important to note here that installing Cydia on dev releases of iOS 6 is officially not supported yet. Therefore this jailbreak as expected wont install Cydia on your device. You will however have root access on your device, which means that you can install any app using SSH or afc2.

If you’re looking to jailbreak with iPhone Dev Team’s Redsn0w tool, please click on this link for a step-by-step tutorial. As aforementioned, it is tethered, but I suspect those happy to run an unfinished, potentially buggy version of iOS won’t see booting tethered as a massive inconvenience.