The jailbreak community and the technology loving world have been talking about it for quite a while now, discussing what they believed would and wouldn’t be included in Apple’s overhaul of iOS. The Worldwide Developers Conference pretty much confirmed or dismissed all of the speculation, leaving us with the first beta of Apple’s iOS 6 software to get our teeth into.

As is the case with nearly all new iOS updates these days, all limera1nable A4 based devices and below like the iPhone 4, iPod touch 4G, iPhone 3GS can now be jailbroken (tethered-only) using the just released Redsn0w 0.9.13dev1.

Before you go ahead with this tethered jailbreak guide below, it must be noted that:

Step 1: Download the latest version of the iPhone Dev Team’s Redsn0w tool, make sure to get the right compatible version for your operating system. [Windows | Mac]

Step 2: Locate the downloaded Redsn0w zip file and uncompress the contents to a familiar location.

Step 3: Download iOS 6 beta IPSW firmware file legally from iOS Dev Center only. Make sure that the downloaded firmware file is specific to the device you are attempting to jailbreak. Once you have downloaded the firmware file, restore it on your device using either Xcode or iTunes.

Note: Before going through any jailbreak process it is always good practice to make a full backup of the device contents. Connect the iDevice to iTunes via a USB cable and make a complete backup through the normal process. If preferred, an iCloud backup can be made.

Step 4: Run the Redsn0w executable file and select ‘Extras‘ from the main interface before clicking the ‘Select IPSW‘ option. 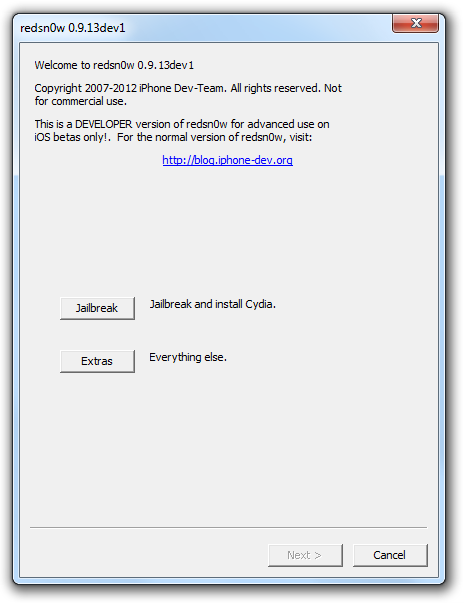 Step 6: On the main interface of Redsn0w, select the ‘Jailbreak‘ option.

Step 7: The rest of the process is pretty self explanatory, with Redsn0w providing on-screen prompts relating to the jailbreak procedure. The only user interaction required is to put the connected device into DFU mode so make sure to follow the steps on screen exactly.

Step 8: When DFU mode is detected by Redsn0w, the rest of the process will be automatically completed by the software. As you’d expect, the jailbreak is tethered-boot, which means; if you come across an instance that your device loses power or restarts, then you would have to boot it into the jailbroken state again. The process of booting it back into the jailbroken state is quite simple actually, simply plug in your device to your PC or Mac, fire up Redsn0w, click on the "Extras" button on screen and then simply click on "Just Boot" and follow the on-screen instructions.

Again, Cydia wont be installed. This is because it is currently not ready for iOS 6 yet. The only way to access the device is through SSH or afc2. As MuscleNerd has said in the official blog post, “ If you don’t know what either of those are, you shouldn’t be using this developer version of redsn0w!”