Although Apple announced iOS 6 only two weeks ago at WWDC, the first beta release to developers gave a firsthand insight as to how the upcoming firmware will look and behave. Now, the Cupertino company has seeded the second beta, with minor bug fixes and enhancements.

iOS 5 – when it arrived – was a pretty major leap from iOS 4, and plugged many of the glaring holes that pet peeves iDevice users had encountered through many previous iOS revisions. Notification Center dealt with the lack of proper structure to notifications, while iMessages offered iPhone, iPad and iPod touch users a great way to communicate free of charge.

iOS 6 – from what’s been showcased – is a rather disappointing effort, in my humble opinion. Yes, the Apple Maps app looks to be something special, combining a sumptuous-looking 3D mode with turn by turn navigation, but short a few little implementations (most of which can already be downloaded onto iOS 5, if you’re jailbroken), it isn’t particularly riveting.

Given Microsoft has just announced Windows Phone 8, which, on the whole, looks very exciting, I do somewhat fear Apple is stagnating in terms of progress with iOS. Live Metro tiles and slick, vastly contrasting interfaces seem a great deal more appealing than a dressed-up version of iOS 5 – and I wouldn’t even count myself as a Windows Phone fan.

Still, there’s plenty of time and development between now and the final iteration of iOS 6, and with a new iPhone expected to join it at launch, we’d expect Apple to have quite a few tricks up its sleeve before both new hardware and new software finally reach the end-user.

If you wish to download the second beta of iOS 6, you can do so via OTA update by simply heading over to Settings > General > Software Update – providing, of course, you’re a developer and running iOS 6 beta 1. The said build is currently not available on iOS Dev Center yet, but we suspect it will be available there too, shortly.

As we’ve said on numerous occasions, a beta build can only be installed legitimately on authorized device UDID’s, so we strongly advise you to stay away from the inevitable flurry of torrent-based downloads to follow.

If you have that much of an interest in the progress of iOS, why not join the Apple Developer Program? It’s certainly worth it – at 99 bucks a year – if you’ve a vested interest in the way iOS is made. 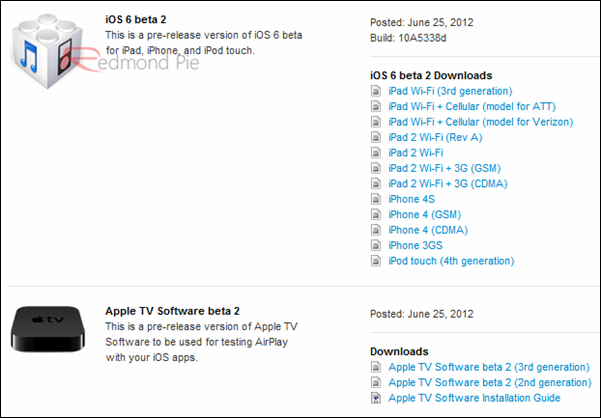