Just when the world was starting to lose hope in RIM’s first attempt to take on the tablet market with the BlackBerry PlayBook, a tool – which is the first one ever of its kind – has popped up in the interwebs which jailbreaks the said device.

Those of you who have been following iOS jailbreak scene must be aware of the advantages a jailbreak can bring to a device. Jailbreak basically gives you root access to your device so you can run unsigned apps or code on a device which are rather unsupported by the device’s manufacturer. In this very particular case however, the device is the BlackBerry PlayBook.

The new tool which goes by the name Dingleberry jailbreak is the first and the only tool available right now which can jailbreak the PlayBook and give you root access to the device. At this point you must be thinking; why should I jailbreak? The answer is a simple one, it opens the floodgates to a wide range of possibilities. 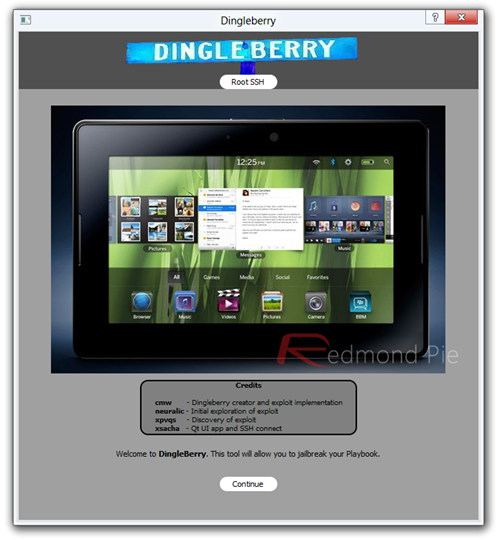 At the moment, the PlayBook falls into the category of an extremely closed system, and we believe that jailbreaking the said device would prove to be very, very fruitful for a lot of people. Jailbreaking the PlayBook also opens the gates for modders to come up with custom ROMs for the PlayBook (much like Android) in which they can freely add or remove features according to their liking and make the dreaded QNX experience on the PlayBook even better in most cases.

If, and only if, the developers out there are willing to take up the challenge, Dingleberry jailbreak has opened up a highway of booting up Android on the PlayBook. Call us crazy if you want to, but even the dying webOS tablet from HP got couple of Android ports. Therefore, we believe there exists a possibility that the PlayBook will see an alien OS booting up on its hardware, very soon.

Being open sourced a few days back, Android 4.0 Ice Cream Sandwich is the latest iteration of Android by the Mountain View based company. By now you must’ve gotten the idea where I am going with this? Yes, I would love to see ICS running on a BlackBerry PlayBook.

Having played with a PlayBook for a good one month, its safe to say that the hardware is quite capable but the software part is a bit of a let down. Keeping that in mind, running Android should be a piece of cake for the PlayBook’s hardware and we’re eagerly looking forward to it.