About SemiTether Jailbreak Compatibility On iOS 4.3.5 And 4.3.4

We’ve been getting a lot of emails lately about this and so we thought it was a good idea to do a dedicated post on it to answer this question once and for all.

Instead of going into details about SemiTether, We’ll first get straight to the point. While the BigBoss only mentioned about SemiTether’s compatibility on iOS 5, we gave it a shot on our iPod touch 4G running iOS 4.3.5, jailbroken with the latest version of Redsn0w, which is version 0.9.9b8. But as expected, installing SemiTether from Cydia greeted us with a complete halt on iOS 4.3.5. The reason? SemiTether is meant for iOS 5.x only. To further confirm whether the test was authentic or not, refer to the photo embedded below: 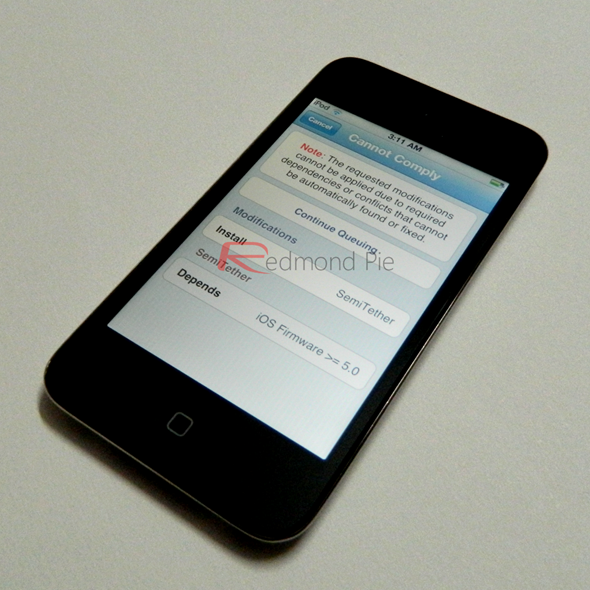 From the image above, you can see that iOS 5 is a key requirement for SemiTether to work, otherwise it will throw you a dreaded ‘Cannot Comply’ error and there’s no way around it.

SemiTether is a very ingenious way to achieve an untethered-ish jailbreak on your device, it’s a package which can be found in Cydia under the BigBoss repo, once installed, it allows you to boot your device as you would if you were jailbroken untethered. While its not a full untethered jailbreak, it is the closest thing to having one. In semi-tethered mode, many key functions of the jailbroken device such as Cydia, Cydia apps, native Mail app, etc cease to work, and you have to connect to a PC or Mac in order to restore some normality. But it is still much better than having just tethered-boot jailbreak.

Well, there you go then, SemiTether doesn’t work on iOS 4.3.4 and 4.3.5. If you have further questions or any sort of query, be sure to drop it in the comments section on our Facebook fanpage.