iTunes 9.1 for Windows and Mac

As expected, Apple has just announced the availability of iTunes 9.1 for both Windows and Mac. This new version of iTunes brings support for the upcoming iPad on iPhone 3.2, a new “Books” section which replaces the existing “Audiobooks” section in the iTunes Store and improvements to Genius Mixes feature. 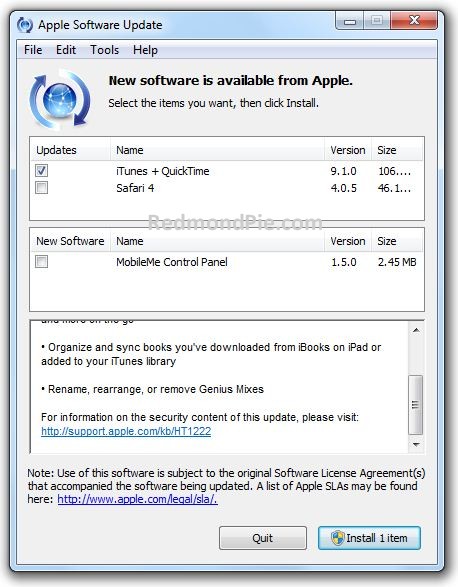 The official change log of version 9.1 is as follows.

iTunes 9.1 comes with several new features and improvements, including:

– Sync with iPad to enjoy your favorite music, movies, TV shows, books and more on the go

UPDATE 1: BlackBreeze has been released which fixes Blackra1n for iTunes 9.1, Jailbroken iPhone 3.1.2 (tethered) devices!! More info can be found here.

UPDATE 2: Blackra1n for iTunes 9.1 has been released which like BlackBreeze, is another tool to fix Jailbroken iPhone 3.1.2 (tethered) devices sync with this latest version of iTunes!! More info can be found here.

iTunes 9.1 can be downloaded for both Windows and Mac OS X from Apple Software Update, or directly from the link given below.