If Apple does not impact its ability to churn through benchmarks thanks to degraded batteries, what about the age-old phenomenon of a simple iOS upgrade slowing the phone down in general? 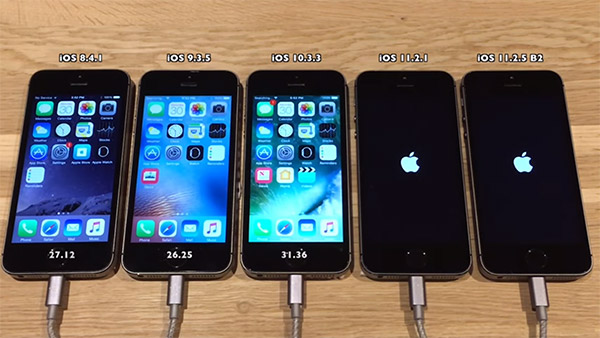 In order to carry out the test, five identical 16GB iPhone 5s handsets were lined up, all running different software – iOS 8.4.1, iOS 9.3.5, iOS 10.3.3, iOS 11.2.1 and iOS 11.2.5 beta 2. The five iPhones were put through their paces via numerous different benchmarks and the whole thing was filmed for your viewing pleasure. The results are somewhat predictable, but we don’t want to ruin the fun – be sure to check out the 13-minute video for yourselves to get a full feel for how different versions of iOS affect iPhone 5s performance.

Apple has been in all manner of headlines this past two weeks thanks to the fact that it limits the speed at which some newer iPhones run their CPUs depending on the state of the device’s battery. With batteries less able to provide as much power, Apple’s software now limits the CPU’s speed in order to prevent the iPhone from shutting down. This makes plenty of sense, but with Apple not being overly clear with what it was doing, many have called foul on the process as a whole. Worse still, some are using it to further their previous assertion that Apple slows older iPhones down via software updates in order to force people to upgrade sooner.

That is nothing short of rubbish, obviously, but that will not stop certain people from telling the world that it is true.