A new report issued today by TrendForce with regards to the iPhone 8 is once again corroborating a number of the previously speculated inclusions, and also focuses on dispelling a major feature; a curved OLED display.

One of the most exciting things about Apple’s upcoming iPhone, likely to be called ‘iPhone 8’, is that even though we are months away from getting an official preview of the device, most analysts and sources are already in agreement on a number of the major inclusions.

Keeping in line with most of the previous reports, today’s report from TrendForce is suggesting that Apple will indeed release a new iPhone 8 with a 5.8-inch edge-to-edge and bezel-less OLED display. The report also suggests that the Home / Touch ID button, which has been an ever present on iPhone since its original launch in 2007, will be done away with in order to make room for a ‘function area‘.

All of those things have been speculated previously, but it’s interesting to see that TrendForce believes this particular iPhone model will not come with a curved display due to yield issues through the supply chain.

The report is also building slightly on the picture, giving us a more comprehensive feel for what Apple could introduced with the top-of-the-range iPhone this coming September. It is suggesting that Apple could pack the 5.8-inch iPhone 8 with 3GB of RAM – similar to iPhone 7 Plus – to compliment the next-generation embedded SoC. 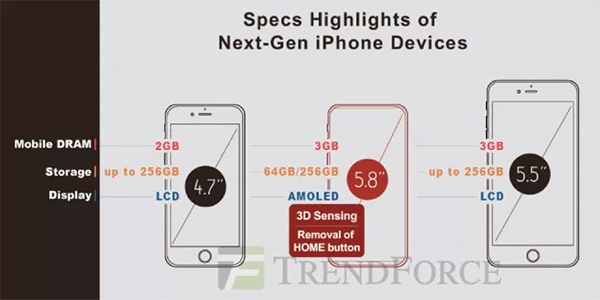 The report is also paying reference to the potential storage sizes of the hardware, with predictions that those wanting to part with $1,000+ will be able to choose from 64GB and 256GB configurations. There’s also fuel being added to the fire pertaining to Apple’s plans to introduce a significantly enhanced, multi-module FaceTime camera which is capable of 3D sensing and could potentially pave the way for facial recognition features.

A lot of what is included in the report is consistent with what we have already heard. However, previous reports have suggested that Apple will take maximum advantage of the change to OLED panels in order to offer a curved aspect to the experience with a screen that wraps around the side of the device. It’s now being suggested that this will no longer happen, although it does ‘confirm’ the existence of 4.7-inch and 5.5-inch iPhone 7s and 7s Plus models with LCD displays, which will be cheaper than the high-end iPhone 8 device.