Things are starting to heat up and get interesting where Apple’s iPhone 8 is concerned. Just a few days ago we were able to see a purported mold of Apple’s next-generation handset, and now, thanks to a product found on Alibaba, we can see what is said to be an iPhone 8 case compared against Apple’s current iPhone 7 and iPhone 7 Plus models.

The information and image of the case have been brought into the public domain by Japanese blog Mac Otakara after acquiring the case from the aforementioned site.

It’s not only great to get a visual understanding of what the iPhone 8 may bring by inspecting the aesthetics of the case but to also see it side-by-side with Apple’s current flagship hardware, the iPhone 7 and iPhone 7 Plus. The visuals are interesting, but it’s also important to remember the likely origins of this case.

The accessory has been put on sale on Alibaba claiming to be a case designed for iPhone 8. It’s unlikely that this is an official case made in conjunction with official input from Apple but rather based on previous leaks and information that’s managed to make its way into the public domain over the last few months. It’s very likely that this won’t be a perfect fit for whatever Apple introduces later this year, but it definitely does gives us enough to consider when it’s put against the existing hardware.

The case immediately finds itself sitting between iPhone 7 and iPhone 7 Plus in terms of physical size, with it being noticeably smaller than the 5.5-inch iPhone 7 Plus, but just slightly larger than the 4.7-inch iPhone 7. There’s also an aperture cut out of the case that would look to be the home of a vertically aligned dual-lens camera system. This is the exact opposite of the horizontal setup found on iPhone 7 Plus. The power button also appears to have moved down a bit, likely due to the vertical camera module arrangement. The lack of a rear Touch ID cut out is also very noteworthy, suggesting that we can expect to see something integrated into the front of the device as opposed to the rear. 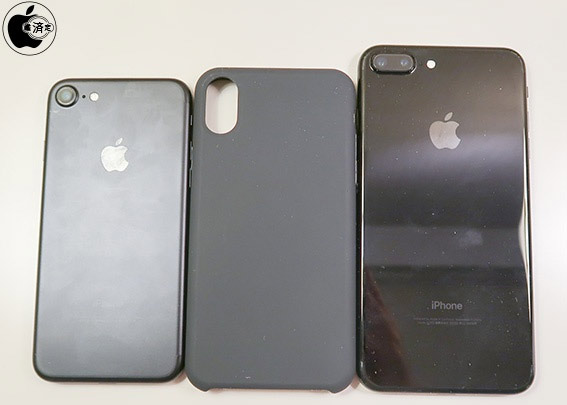 As always, it’s worth taking this case and what it represents with a grain of salt given the fact that it’s likely based on rumor and speculation rather than any official schematics or dimensional drawings. However, as we get closer to an announcement, it’s good to see something like this lined up against the existing hardware.