iPhone 7 Price Ranked By Country: Here’s The Cheapest And Most Expensive Place To Get The Phone

If you have ever purchased one of Apple’s iPhones and been surprised at not only how much the hardware actually costs to buy, but also how that cost ranks against other countries, then you should really be taking note of the new Deutsche Bank report.

Titled ‘Mapping the World’s Prices 2017’, the report shows the cost of Apple’s iPhone 7 in 33 different countries.

It shows the country itself, as well as the outright purchase price of iPhone 7, how that cost is relative to prices in the United States, and even the cost of iPhone 7 relative to its predecessor, iPhone 6s. The output being that you get an easy-to-read chart which basically tells you where the best place to purchase iPhone 7 actually is.

At the bottom of that list is the United States with an iPhone 7 cost of $815 for a 128GB 4.7-inch version of the device. There’s little difference between the USD cost of the hardware in America and in other countries such as Japan, Hong Kong, Malaysia, and Canada which retail at $815, $821, $846, and $855 respectively. However, the prices start to move in an upwards direction from there.

In the middle of that cost chart, you will find European countries such as France, Spain, Germany, and Austria with costs ranging from $951-$962. However, when you get to the top of the ranking, you realize that it’s probably prudent to stay clear of purchasing iPhone hardware in Russia, Brazil, or even Turkey, where prices hit the whopping $1,200 mark for the same 128GB variant. 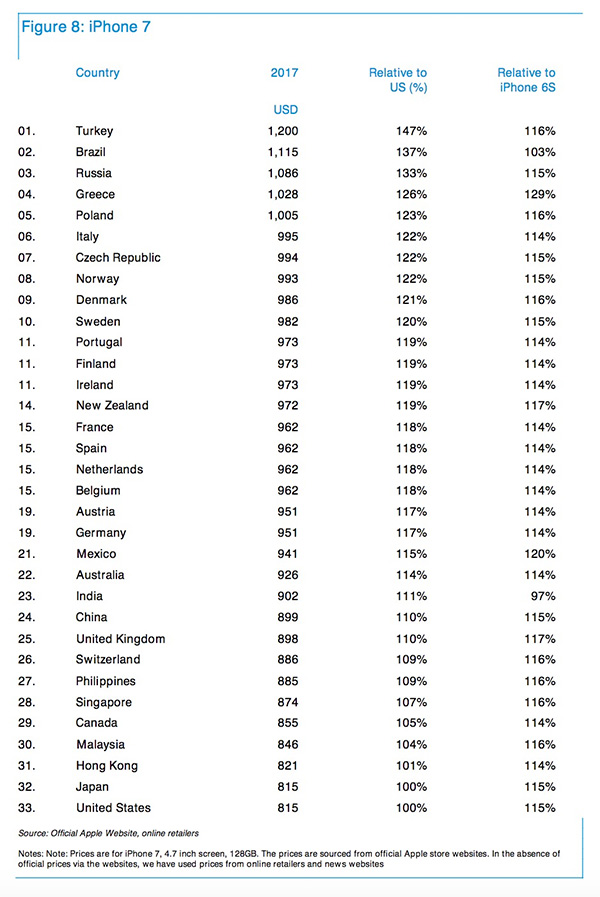 Depending on where you are in the world you can check out the chart and see how much one of Apple’s iPhone 7 costs in your territory. In fact, you may actually want to see if you know someone living in a different country with a cheaper purchase option.

The actual reality is that it is a little bit of an eye opener when it comes to exactly how much Apple charges for a 128GB iPhone in different parts of the world. It also instantly shows that it literally doesn’t make any sense to purchase iPhone 7 in Turkey.