iPhone 6s And iPhone 6s Plus Get Price Cuts In India

There’s nothing quite like a reduction in price to surge the sale of a particular product in a market that has shown a decline of that product. According to a new report, Apple has reduced the price of its current flagship smartphones, the iPhone 6s and iPhone 6s Plus, in India as part of an attempt to reinvigorate sales in the market. The same report is also suggesting that the annual Diwali festivities in the country has pre-occupied consumers, causing a slump in sales of the handsets.

Different markets definitely show different trends at certain times of the year, but the Indian market is historically no different to any other at this time. Apple, like most other corporations which produces and ships hardware, typically expects the final quarter of the calendar year to be the most financially lucrative as part of the approach and finalization of the festive and celebratory holiday period. It seems that as celebrations in the country were on the rise during fourth quarter due to Diwali and other festivities, it resulted in sales of the iPhone 6s and 6s Plus nosediving, prompting Apple to now reduce the price of the hardware by up to 16%. 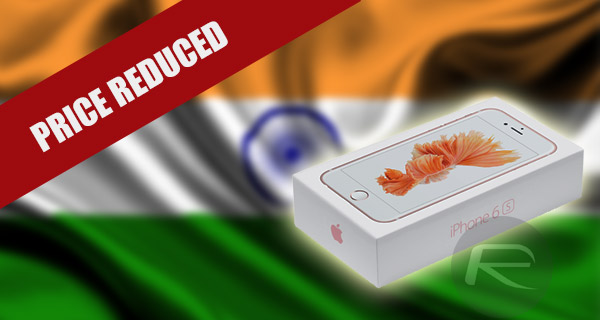 That’s actually quite a significant reduction given the fact that both of those devices are only two-month old and are currently Apple’s flagship devices. The price reduction means that the 16GB iPhone 6s model, which originally hit the Indian market selling for 62,000 Rupees only two months ago, is now selling for between 52,000 and 55,000 Rupees. That fluctuation in price is a result of where the consumer actually purchases the device from. The 16GB iPhone 6s Plus, which is the entry-level plus-sized version of the hardware, is now available for around the 62,000 Rupees mark. The good news is that all storage sizes and all models have benefited from this price reduction.

One of India’s largest e-commerce websites currently has the various models listed at the following price points:

Apple could be a victim of its own competitive pricing in that sector. The iPhone 6s price reduction follows hot on the heels of a similar reduction for the iPhone 5s in India last week. Tarun Pathak, who operates as a Senior Analyst at Counterpoint Technology Market Research, believes that the reduction of the hardware could have produced knock-on effects for sales of the iPhone 6s.