Samsung may have taken the earliest possible opportunity to mock Apple’s latest iPhone – and let’s be honest here, we wouldn’t expect anything less from the maker of the Galaxy Series of devices – but it seems that the unveiling of the iPhone 6 may be adversely affecting the Korean company in a way they’d never care to admit. In the aftermath of Tuesday’s media event at the Flint Center, buyback service Gazelle are reporting that requests for Samsung hardware trade-ins were up over 200% as consumers look to free up some financial capacity to purchase the iPhone 6 or iPhone 6 Plus when it hits the shelves.

Apple has made no secret of the fact that it sees the introduction of the larger screen iPhone 6 and 6 Plus as a rare opportunity to gain more users by converting old Android users to iOS. Perhaps unsurprisingly, hoards of existing iPhone owners have begun trading in older devices in preparation for the launch of the iPhone 6 next Friday, but it will be comforting news for Tim Cook to learn that making the jump to 4.7 and 5.5-inch offerings seems to have had the desired affect of attracting valuable customers from competing platforms. 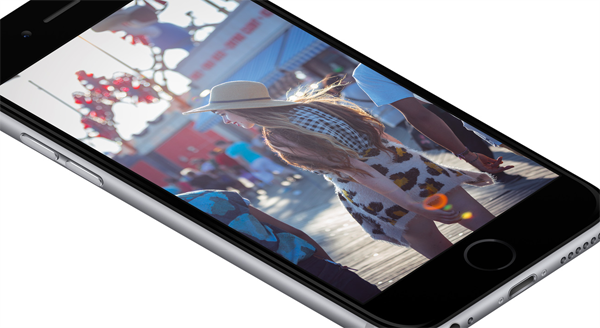 Samsung, and long-time Android users in general, are no strangers to interacting with a plus-sized smartphone. Samsung’s Galaxy S and Galaxy Note series of devices have been catering to the needs of those who like things super sized for quite some time. In fact, it even felt as if the world’s largest smartphone vendor had an almost unbreakable dominance over the “phablet” lovers.

The 4.7-inch iPhone 6 and 5.5-inch iPhone 6 Plus may represent Apple’s initial foray into the world of jumbo-sized smartphone, but early indications suggest it’ll prove to be a fruitful and financially rewarding move. 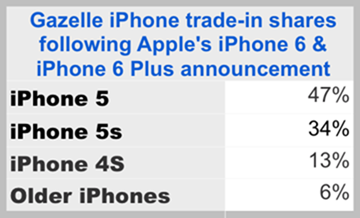 Apple’s introduction of its jumbo devices is clearly also having a positive effect on companies within relevant industries. Gazelle has seen its trade-in offers rise by a staggering 293-percent in the last four days, averaging a mind bursting 480 offers each minute. Existing iPhone owners seem to be keen to progress from relatively new hardware to the iPhone 6, with iPhone 5 trade-ins rising by 346% and iPhone 5s trade-ins growing by an impressive 404%. We imagine that this type of trade-in activity is mirrored across other buyback services.

What about you? Are you planning on trading in an older device to get Apple’s latest iPhone?