Many of Apple’s mobile adversaries, including HTC and Samsung, took to Twitter on Tuesday to offer their verdicts on the iPhone 6 / 6 Plus launch, and rather unsurprisingly, the new smartphone double-act didn’t garner favorable reviews. While you’d expect rivals to take a pop at one another at times like this, though, there’s a special animosity between Samsung and its Californian rival, and as such, the Korean outfit has upped the ante with a series of half a dozen clips picking faults in Apple’s newly-unleashed devices. In addition, there’s even a little dig at the hit-and-miss live stream that Apple put out, below, you can enjoy the playlist in its entirety.

Manufacturers across the mobile industry tried desperately hard to remain relevant while the world was transfixed with what was going on at the Flint Center, and having already thrown Steve Jobs’ words that "nobody would buy a big phone" right back at Apple, appears to have spent the last couple of days in the same vein. 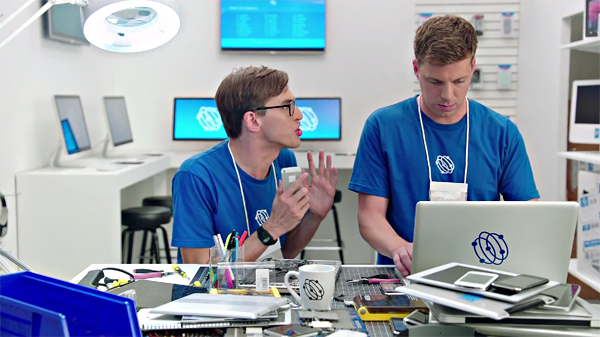 The first clip of the "It Doesn’t Take a Genius" playlist relates to the unreliability of Apple’s live stream on keynote day. For a company of Apple’s stature, it certainly wasn’t good enough, but on the flip-side, it could be argued that Apple didn’t foresee the overwhelming interest in the announcements.

As you will see, the pairing in the video are made to appear like Apple Store "Geniuses," and in this instance, they’re portrayed as anything but.

The slander campaign continues almost without relent through a total of six videos, which also call out iPhone 6’s display, battery and other features while pointing the on-looking tech world in the direction of its very own Galaxy Note 4.

Even though the Note 4 has a fair amount of one-ups over the iPhone 6 Plus and other devices can trump the iPhone 6 in terms of specs, we’ve seen time and again that it actually doesn’t matter a great deal. When push comes to shove, consumers survey a number of attributes, including the ecosystem, and if your platform of choice happens to be iOS, then the quad-HD display of the Galaxy Note 4 or the removable storage offered by the LG G3 is unlikely to sway you.

Still, it’s fun to see the big guns slog it out, and below, you can check out Sammy’s new video gift to Apple: