Throughout most of the year, the price of most iGadgets scarcely move beyond the occasional $10 or $20 saving at most retail outlets, and even then, said offer usually requires you to grab a gift card for that store. But with the holiday season upon us, the big retailers have come out fighting with some aggressive pricing, and following the discounts offered by Walmart and Target on Apple’s coveted iPhone 5, Fry’s has sought one-upmanship by offering the handset for just $126.

It’s the cheapest available on the market right now, and although it requires you to sign up to the contract for two years, it’s a dollar cheaper than the Walmart offer of the 16GB iPhone 5 for $127. Okay, so it’s not a massive saving, and whether you opt to pick one up from Fry’s or Walmart should really come down to which is the more convenient commute. 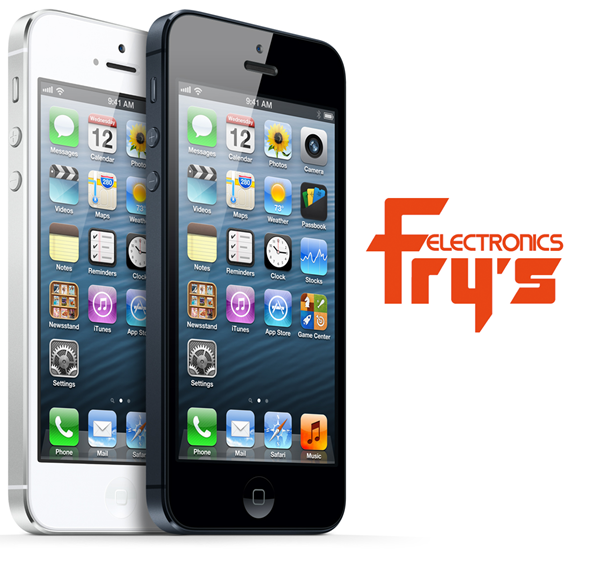 If you want a little more space than the base level, you should certainly look at the larger storage configurations, both of which are also on deal at Fry’s. The iPhone’s memory is not something that can be upgraded once purchased, so if you like to like to fill your device up with content, the 32GB and 64GB iPhone 5 can both be had for $226 and $326 respectively.

Consumers may fall over each other to get the deals in the run up to the holidays, but there’s just as much pressure on the retailers in the ongoing battle to coerce shoppers into the stores. Outlets like Fry’s and Target are happy to take a slight hit on the price of an iPhone 5, because by restricting the offer to in-store collection only, they hope you’ll grab some more product whilst you’re there.

The iPhone 5 will be a key component in Apple’s effort to make this the biggest Q4 to date, but with the Cupertino company and its suppliers now managing efficient yield, analysts are certain Apple will post its biggest numbers yet following the Christmas rush.

So, if you’re looking to grab yourself (or indeed, somebody else) an iPhone 5 this holiday, your best bet is to head down to Fry’s or Walmart, where you can pick one up for less than $130.

Head over to this link and grab yourself an iPhone 5 now if you haven’t already.