Apple’s iPhone 5 was predicted to be the biggest smartphone release of the year, and so has proven to be the case. The first weekend sales eclipsed that of any other handset released in 2012, but despite high demand, yield issues have prevented the Cupertino company from producing the numbers to adequately meet demand. Initially, those looking to order the iPhone 5 from Apple’s online Store were met with a wait of up to four weeks, but with that wait having recently been slashed to one week, the latest and greatest Apple smartphone is now listing as "in stock" in a handful of countries.

Considering we’re only just over two months into the iPhone’s 5 shelf life, it’s a pretty impressive feat. Main manufacturer Foxconn has quite publicly highlighted how elements of the new handset’s design have made meeting the demands of production nigh-on impossible at times, but everything now appears to be running like clockwork.

Those residing in the United States, Canada, Mexico, Australia, and New Zealand among others, are all stocked-up, while the United Kingdom Store will ship in one-to-three business days.

The holiday season is impending, and is a critical period for all consumer electronics companies, and ever since it switched the release of the iPhone from the Summer to the Fall, Apple’s Q4 sales figures have continued to grow exponentially. It’s all very well enticing consumers, but if the units are not there for them to purchase, they may wind up looking elsewhere. Still, many consumers looking to grab themselves an iPhone 5, unlocked straight from Apple, can now do so without waiting for weeks on end. 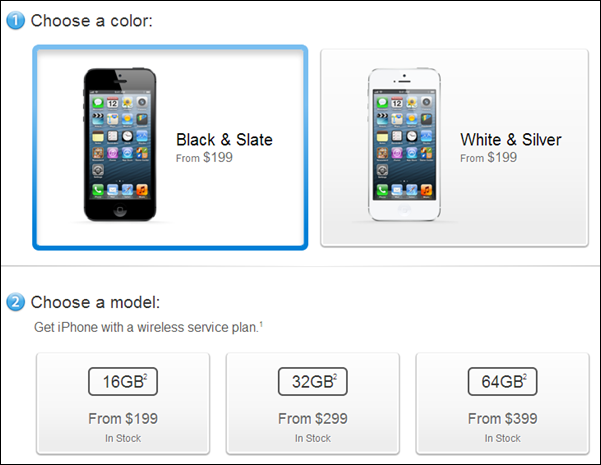 Meanwhile, the main retailers are continuing to battle it out for the affections of would-be iPhone 5 buyers. Both RadioShack and Target will throw in a $20 iTunes Store gift voucher if you sign up for a two year contract and pay the $200 cost of the handset. Earlier today, Best Buy also joined the debate, by offering $25 in iTunes credit to any consumer buying the iPhone 5 on contract.

Whichever route you take, Apple looks to be healthily on top of supplies, and after the initial rush which Tim Cook’s company struggled to cope with, the world is now awash with iPhone 5s.