iPhone 4S Gets 96% Satisfaction Rate, Most Popular Apple Smartphone Yet

Because of their tight integration with iTunes, easy to use software and powerful features, iOS devices generally get higher satisfaction rates than, say, Android devices which, despite being quite powerful, aren’t as easy to use (this is coming from an Android enthusiast). The latest smartphone from Apple – the iPhone 4S – is no exception as results of a recent survey indicate that the iPhone 4S has the highest customer satisfaction ratings for any Apple smartphone yet. Details after the jump!

The news comes from AppleInsider – a blog dedicated to covering general news and rumors related to Apple – in the form of a post in which they discuss the results revealed by a survey.

The survey was conducted by ChangeWave Research – an independent survey research firm – in which they asked over 200 iPhone 4S owners to give their opinion on their new shiny new smartphone as well as notify the firm of their most liked/disliked features. 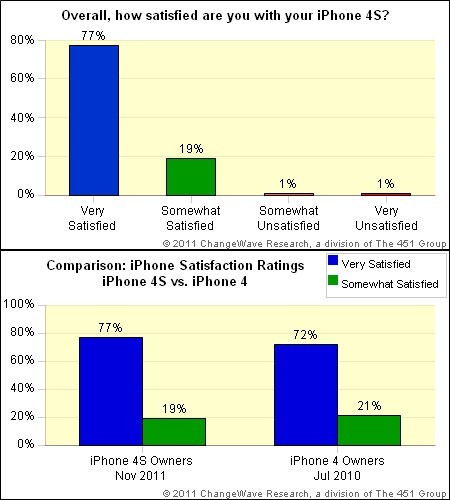 The iPhone 4S carries the highest customer satisfaction ratings of any Apple smartphone yet, with a new survey finding that 96 percent of users consider themselves satisfied with their purchase.

Of the 215 owners surveyed, 49% indicated that Siri Digital Assistant was their favorite feature of the iPhone 4S, with ease of use, 8MP camera, faster web browsing and screen resolution trailing behind with 39%, 33%, 24% and 23% respectively. 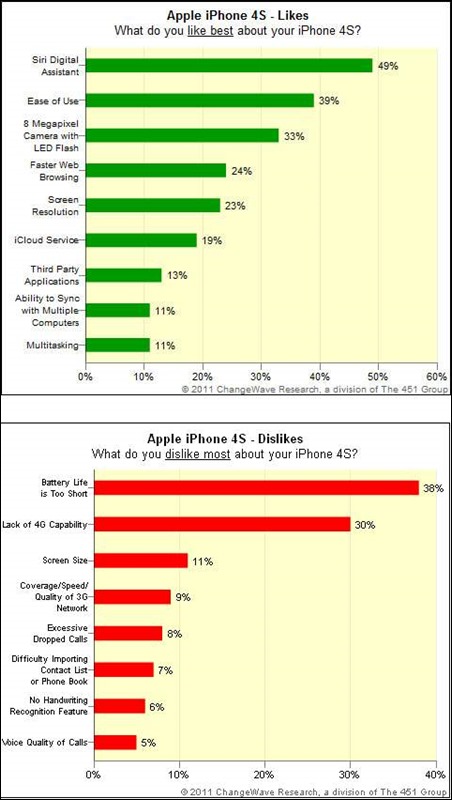 As for “dislikes”, these owners felt that the battery life of iPhone 4S was just too short (38%). The second and third dislikes were lack of 4G and small screen size: shortcomings that were highlighted in a recent ad by Samsung.

While I’m sticking to my Galaxy S II till the inevitable iPhone 5 comes out, I do know plenty of iPhone 4S owners and I do know that they are quite satisfied with it. What about you? Let us know in the comments section over on our Facebook page!