Smartphones and tablets, while often lambasted for their lack of durability in dealing with those everyday mishaps, certainly appear to be getting stronger as we saunter on through the generations. But perhaps some of today’s revered gadgets are, in fact, a lot more robust than we’d give them credit for, and in the case of one Apple iPad that inadvertently found itself in a head-on collision with an automobile, the device actually seemed to come off better than the car itself. The owner of the iPad in question accidentally drove off while leaving the Apple slate atop the roof of their car, but as it flew off and towards the vehicle behind, the impact left the device embedded within the bumper.

Having seen a few iPad drop tests in the past, I would have expected the iPad to have been retrieved from various different locations in and around the point of impact, but in actual fact, the tablet was so firmly in place, that a hammer was required to hoick it out. After careering into a large car and having been treated to the hammer, you would perhaps have expected the device to be a write off, but while it had taken a fair bit of cosmetic damage (cracked screen, big scratches etc.), the driver of the hit vehicle was able to use the iPad to locate the owner for a not-so-safe return. 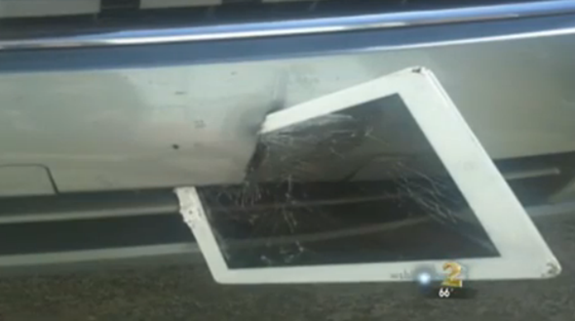 The driver of the trailing car heard a noise, but didn’t realize until some time later that she’d been driving around with an iPad attached to the front of her car. The fact the iPad didn’t disintegrate into a million pieces is one thing, but to have a device still turn on having discovered flight, high-speed impact and dealing with the elements at high speed, is pretty amazing. Of course, the angle in which it hit the car was telling, for if the screen had hit the car face-on, it would have been a write-off, but like many a good fortune story, it seemed to hit the car at just the right point.

The iPad owner’s response to all this is unknown, but while he or she may lament the damage, I’d say they’re lucky that it’s still in one piece.