Samsung is just a couple of weeks away from releasing its flagship Galaxy S4 to the public, and although things have been a little quiet on the ad front since the announcement on the 14th of last month, the Korean company is back with quite a few clips reminding us why the handset is anticipated by so many. The YouTube videos, which were brought to our attention, comprise of very short commercials highlighting some of the marquee features of the upcoming device, including Sound Shot, Group Play, and S Translator. Check them out right after the break!

The Galaxy S4 may be packed to the rafters with high-end hardware, but one thing folks admire about Samsung, is that the company is just as forthright in producing exciting new software features to accompany every new release. The excessive processor, for example, would seem even more ridiculous for running the standard Android Jelly Bean 4.2, but with a plethora of homemade apps (mostly useful, might I add), Samsung looks to have produced another solid, all-round device. 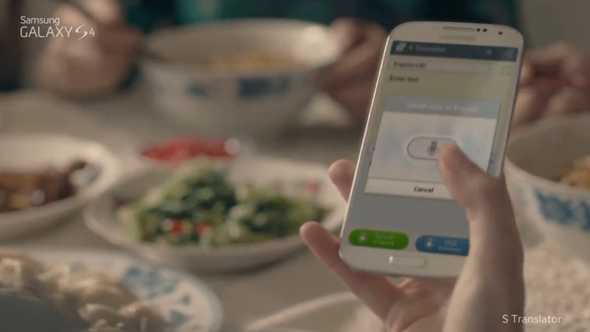 In terms of design, it is very similar in appearance to its predecessor, the Galaxy S III. But in spite of offering beefier hardware, it’s still noticeably thinner than last year’s release.

Sound Shot is an interesting concept, in that it allows users to record tidbits of sound to better set the scene for a photo:

Group Play, meanwhile, permits Galaxy S IV users to team up in the playing of music, helping boost the richness of sound by turning a cluster of devices into a multi-speaker system:

The fourth and final ad concerns S Translator, and offers real-time translation of spoken work from one language to another. Although the demo looks good, there are always limitations to what these automated systems can do, so we strongly suspect that not every interaction with S Translator will play out as smoothly as illustrated here:

The Galaxy S4 will go head-t0-head with the HTC One, and although the Taiwanese company has stepped up to the plate with its gorgeous example of how a smartphone should look and feel to the touch, it’s unlikely to stop the rampant Galaxy S series from recording yet more mammoth sales.