iOS 9.1 Firmware Is No Longer Being Signed By Apple

It may not be the festive news that jailbreak fans and aficionados wanted to hear, but Apple has officially stopped digitally signing its iOS 9.1 firmware. In the current jailbreak landscape this is not particularly significant news at the moment, predominantly because there is no jailbreak available for iOS 9.1 or 9.2. However, the internal decision made by Apple now means that a downgrade from the most recent iOS 9.2 firmware to the earlier iOS 9.1 is effectively impossible for anyone who may or may not have been considering going through that process.

It’s fair to say that the majority of hardcore jailbreak fans who simply cannot live without the benefits that a liberated iPhone, iPad, or iPod touch brings have opted to stay jailbroken on iOS 9.0, 9.0.1, or 9.0.2 where a stable jailbreak is available thanks to Pangu 9, meaning that those users have chosen to shun Apple’s latest iOS 9.1 and 9.2 firmware updates and continue to do so. However, those who may have updated, either accidentally or in the hope of a jailbreak being made available for iOS 9.1 or 9.2, are now unable to even go back to 9.1. 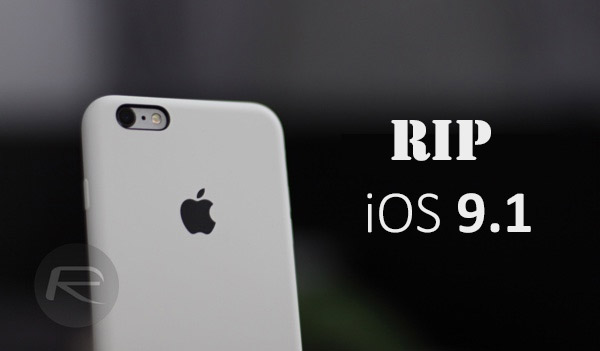 If you do happen to be stuck on iOS 9.2, then it may not be all doom and gloom for the long-term. There’s a rumor that is consistently growing with intensity in the community that the TaiG jailbreak team has a working jailbreak for iOS 9.1 and 9.2 firmware versions, which would work across all devices capable of running those versions of iOS. Of course, at the moment that is just speculation based on something posted on Weibo and has yet to be officially confirmed – or denied for that matter – by TaiG. In a similar fashion, Pangu is also rumored to have a working jailbreak solution for iOS 9.1/9.2, but with this rumor being sketchy at best, we would advise you to take it with a grain of salt. As is always the case with matters such as this, it’s a case of waiting for the official word to be given by the teams purportedly involved in the jailbreak.

The release of the most recent jailbreak, Pangu 9 back in October supporting earlier iOS 9.0/9.0.1/9.0.2, managed to blindside the majority of the jailbreak community. Users, developers, and bloggers alike were all taken by surprise when the tool dropped for the Windows platform initially. In fact, given the fact that Cydia and its Substrate had undergone changes in preparation of the jailbreak, it seems that Jay Freeman was one of the very few who was privy to the fact that the release was actually coming. Let’s hope the rumors are correct and that either Pangu or TaiG drops a similar surprise on all of us very soon.