iOS 8 SMS Continuity Feature Will Be Available Next Month

Apple took the wraps off a number of great software features at this year’s Worldwide Developers Conference, and among them, Continuity seeks to allow users to work between devices with as few seams as possible. Incorporating OS X Yosemite as well as iOS 8, Continuity has promised to strengthen ties between Apple’s two major platforms, and SMS Continuity, which allows SMS and MMS messages to be managed through the Messages app on iPad and Mac, is one of the most useful of them all. Unfortunately, though, this feature will not roll out until next month, meaning that while iOS 8 is just days away, SMS Continuity won’t make the initial cut.

To elaborate, SMS Continuity brings an iMessage-like infrastructure to messages that are not processed through iMessage. Apple’s instant messaging service, which first hit the scene alongside iOS 5, has been a real hit due to its secure, convenient, and generally reliable nature. But while it’s useful to be able to continue conversations on a Mac that began on an iPhone or iPad, for example, the fact that SMS is not means that you can only hold some conversations on devices aside from the iPhone. 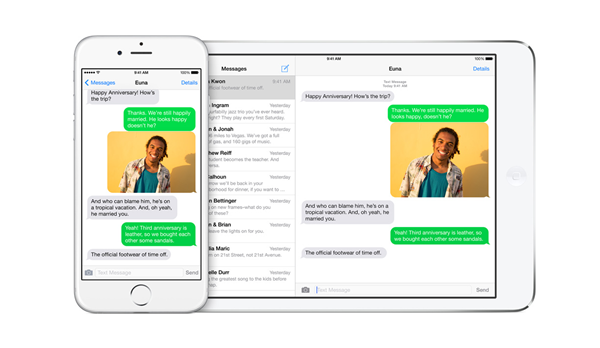 This will all change with SMS Continuity, giving Mac and iOS device owners the same Messages functionality as currently seen on the iPhone. As ever, text messages will still show up in green as opposed to iMessage blue, meaning that you’re aware of how your message is being sent and received, and although we’re looking forward to its arrival next month, we’re a little bit gutted that it has been delayed.

Barring any dramatic, last-minute errors, iOS 8 will roll out to the public on September 17th. The GM build is already out there for developers, so from a mobile sense, Apple is on schedule.

With Yosemite expected next month, Apple will surely want to have SMS Continuity ready to rock from the very beginning, so here’s to hoping the development speeds up and that no further delays are encountered along the way.

We’ll be having a hands-on run through of iOS 8 and OS X Yosemite as they arrive, assessing the new features and letting you in on any special quirks and tips that you might have missed, so stay tuned!