Even though you can pick up an iPhone 5s with up to 64GB of storage space while the iPad ranges push the boat all the way out to 128GB, most of us still like to de-clutter wherever possible. Whether this takes the form of moving our media content to the cloud or simply deleting apps as and when they’re no longer needed, it’s nice to have a substantial amount of space spare. One way you can save space in the beta’d iOS 7.1 is by removing unwanted OTA updates that have been downloaded onto your device, and as discovered by the folks at Macerkopf, you’ll be able to save yourself a tidy 1GB!

Although those individuals with large amounts of free space can afford to be a little more profligate with regards to downloading and general housekeeping, the same cannot be said of those on the lower configurations. 16GB, once you consider the fact that it’s not, strictly speaking, 16GB of pure storage, your spare space doesn’t stretch very far, and with the stock OS also taking its fair share, you can often find that you’re actually rather limited. 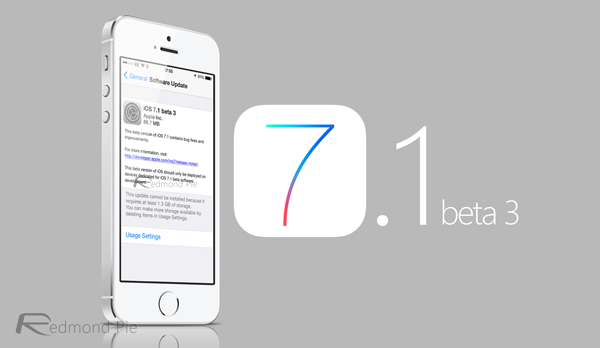 Only during the last couple of years has Apple introduced OTA software updates, and while these are useful for those looking to completely sever ties with their desktop or notebook, they do have their issues. As well as causing issues for those looking to jailbreak, OTA updates are often downloaded and left to fester, even if the user doesn’t have any vested interest in installing it.

But as the eagle-eyed folks of Macerkopf have discovered in the third beta of iOS 7.1, these files can easily be removed, and with ~1GB added to your free storage stats once you’ve lightened the load, you’ll have plenty of room for more music, games, videos, photos and apps.

The steps to remove it have been outlined below:

Step 1: Open the Settings app from your home screen. 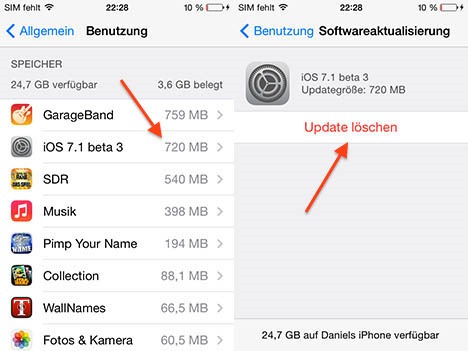 This new ability to delete the firmware file may be a part of the beta process, but there are, as ever, no guarantees that the final, end-user release will follow suit. Given that Apple does want its iOS users to always be running the latest version, the feature would seem to go against this ethos. Then again, since not everybody necessarily wishes to update, it makes sense for the Cupertino giant not to beset such a sizeable and unwanted piece of bloatware on board.

(Source: Macerkopf) Thanks, Andre for the hat tip!