Hello there, everyone! It’s time to do another post in our series of comparison posts in which, well, we compare stuff. In this comparison post, ‘stuff’ is the three major mobile operating systems – iOS 5, Android 4.0 Ice Cream Sandwich and Windows Phone 7.5 Mango – and it is their feature-list which is compared.

Although, yes, it is a bit unfair to compare two already-released OSes – iOS 5 and WP7 Mango – against an OS that is still somewhat in the making (Ice Cream Sandwich); please keep in mind that this is more of a comparison of features (which, we believe, are final) rather than a comparison based on how these OSes perform in daily life.

Let’s begin with a little history: iOS (then known as iPhone OS) was revealed alongside the original iPhone back in 2007. Apple called it the most advanced mobile operating system and claimed that iOS+iPhone was 5 years ahead of anything else available in the market. Since then, we have seen four major updates, each of which added one highly demanded feature or another. Today, iOS 5 is one of the most feature complete mobile OSes available. It was released on October 12th.

Android OS was unveiled in 2007 as well, but was launched in 2008 with the HTC Dream (aka T-Mobile G1). It is considered to be the most rapidly-developing and feature-complete OS of the bunch, but because of its focus on features, the OS has been lacking in the user-experience department. However, its upcoming release – Android 4.0 Ice Cream Sandwich – is expected to offer a vastly improved experience as Google claims that design and UX was a primary focus during development. Android 4.0 Ice Cream Sandwich will be available along with Galaxy Nexus sometime in November.

Lastly, there is Windows Phone 7. It was announced last year and is the ‘spiritual’ successor to Windows Mobile. Its initial release had limited features, but Windows Phone 7.5 Mango – which was released only weeks ago – makes up for most of the limitations. WP7 isn’t as popular as iOS or Android, but its popularity is expected to shoot up exponentially once mobile phone giant Nokia starts pumping out their WP7-based smartphones.

So, which OS is the best? 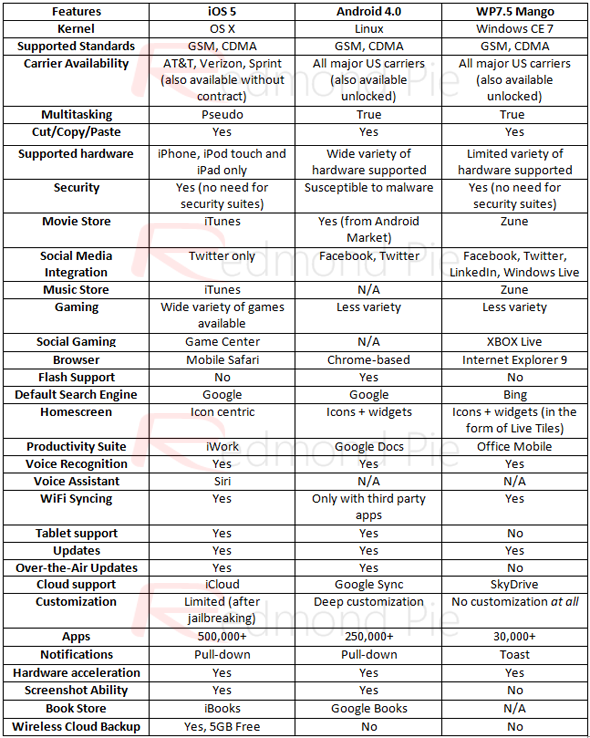 Since we’d rather not ignite a fanboy flame war, the question we presented before the table will be left unanswered. Each OS has its set of pros and cons and it is you, the consumer, who has to decide which set of pros/cons suits you best. I prefer Android myself because of its endless customizability and varied hardware options while other team Redmond Pie members such as Uzair and Oliver prefer iOS because of its overall polish (both in hardware, software department) and high quality apps. It is really up to you to decide which OS is best for you.

Feature-wise, though, we have readied the table you see above which, well, compares one OS’ features against another’s. We leave it up to our readers to decide which OS is most feature-complete. Use the voting system embedded below to let us know!

Looking forward to your comments on our Facebook page!