The Verizon iPhone 4, which was recently announced today will officially feature a wireless tethering -like feature which will allow it to turn into a mobile hotspot! Dubbed as “Personal Hotspot”, this feature allows up to 5 devices onto the personal network and share the iPhone’s cellular data connection. The hotspot itself will come built directly into the OS of the new Verizon iPhone 4, running the new iOS 4.2.5.

The personal hotspot can be connected to another device, and it requires a password to join the network and share the data usage on the connecting device. The menu for the “Personal Hotspot” can be found on the Settings page on Verizon’s iPhone, directly below the built in Wi-Fi feature, as shown in the image below. 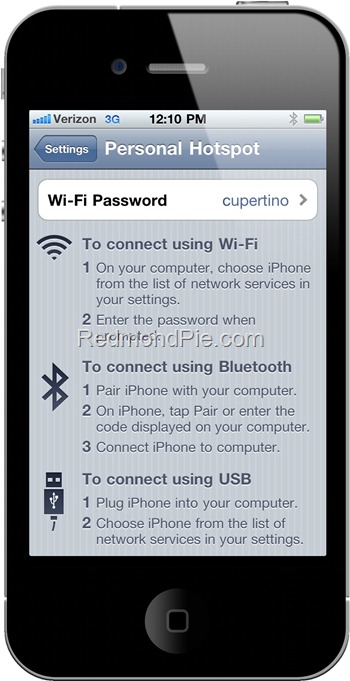 The only problem that most common users will face, is that the Hotspot will be subject to the approval of individual carriers, requiring the user to be onboard for allowing their customers to access the feature of the hotspot. AT&T has announced that it has "no plans to announce today" but it has said to be "evaluating" the feature.

The big question on everybody’s minds about the CDMA iPhone’s mobile hotspot feature, is whether it will remain exclusive to CDMA models? iPhone users will be aware of the Internet tethering via USB and Bluetooth included in iOS 3.0 released in mid-2009, AT&T did not support the feature for up to an entire year as it cited concerns over network performance, before finally supporting the feature in iOS 4.0.

It’s worth noting that several mobile hotspot apps (like MyWi) have been available for sometime for those who jailbreak their devices. This means that there is no technical reason that the feature can’t be added to any iPhone. It is rumored that Apple will release this feature for GSM iPhones as part of iOS 4.3 update on February 10th. (MacRumors)