Chinese hacker and security researcher Min Zheng – who currently plies his trade at Alibaba Labs – has confirmed that he has managed to successfully jailbreak iOS 11.3. This revelation follows on from his earlier post on social media where he confirmed that he had managed to achieve root shell access on the platform.

Zheng’s previous tweets had shared progress on the work that he was undertaking with Apple’s iOS 11.3 platform but had also stated that it wasn’t actually a jailbreak due to the fact that he wasn’t able to remount rootfs and get R/W privileges to install Cydia.

This latest tweet comes with the words “This time. It’s a real JB now” which confirms that the said researcher has been able to overcome some of the previous problems and actually get Cydia installed on the device. The tweet also contained two accompanying screenshots showing Cydia on the iPhone’s Home screen as well as the root shell access showing the existence of Cydia.app in the /Applications folder.

It’s definitely exciting to see that progress has been made from Zheng’s side but it’s a little too early to be getting excited about exactly what this means for the community as a whole. It’s very likely that Min Zheng has been able to jailbreak the device running on iOS 11.3 and get Cydia installed using complex methods which involve a lot of work from the command line. This is not going to be a suitable solution for any device owner who wants to be liberated on iOS 11.3 and will, therefore, need some additional work to package everything together into a tool which can be released to the community.

With that said, there isn’t even confirmation that Zheng is willing to undertake that work and provide something usable to community. If we were to guess it, we would say that it’s highly unlikely that Zheng will share his work with the public in the form of a jailbreak tool. 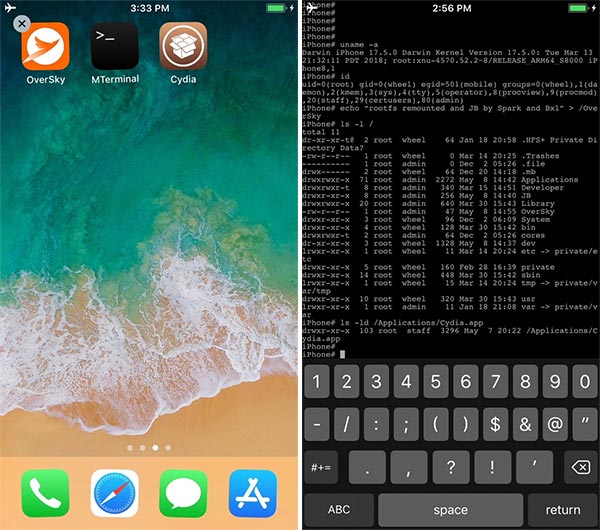 For the next public jailbreak, iOS 11.2.6 still looks like the best bet to us, followed by iOS 11.3 but only if Ian Beer’s POC exploit is turned into a usable jailbreak.

Apple has already closed the iOS 11.3 signing window, meaning that anyone upgrading to iOS 11.3.1 or beyond will have an incredibly difficult – if not impossible – time downgrading back to a vulnerable version of iOS. Stick to iOS 11.2.x or iOS 11.3.0 if you want to have any chance of jailbreaking your device in future. You’ve been warned.