Gone are the wonderful days of jailbreaking when a tool or utility would be released and you could almost guarantee that developers would be on the ball offering compatibility with their tweaks and extensions.

Modern jailbreaking is more about struggling along with what we have rather than hoping for an ideal scenario, which is why yet another continuously updated sheet has appeared which gives an insight into tweaks which offer compatibility with the latest Electra jailbreak. 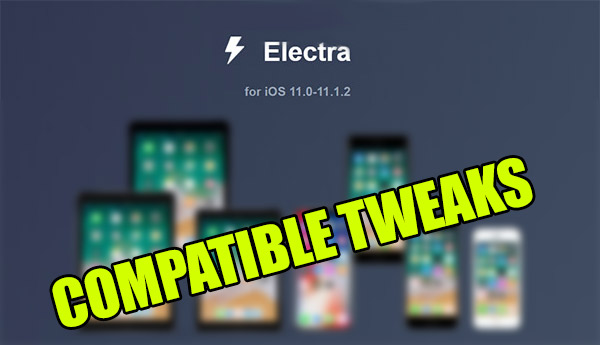 So, for those that may not be in the know, or who may not keep abreast of what’s going on in the jailbreak scene, Electra is the latest jailbreak to land, offering liberation for 64-bit devices running iOS 11 through to iOS 11.1.2 thanks to the inclusion of the async_wake exploit discovered by Ian Beer of Google’s Project Zero. While the beta version of this jailbreak wasn’t a perfect jailbreak solution as it didn’t offer a functional version of Cydia, but the final version released now does offer Cydia support. So, the important question is, which tweaks work and which don’t?

In fact, it’s actually deeper than that. Compatible iPhone and iPad owners not only want to know which tweaks work and which don’t, but they also want to know the extent of which those packages are broken. As an example, will an installed tweak just not allow itself to be invoked and not execute its functionality? Or, more seriously, could that package cause the device to go into a boot loop or cause more serious damage from which there’s no real return without a full restore of the underlying firmware? These are the important questions.

In order to answer them, a continuously updated spreadsheet has been created titled “Electra Tweak Compatibility List”. As the name suggests, the spreadsheet allows community members to report tweaks that they have tried and tested which can then be uploaded to the Sheet by the administrators for wider visibility.

At the time of writing, the spreadsheet had approximately 500+ tweaks and extensions included in it which all show as “Stable/Works”, “Doesn’t Work”, or “Issues”. There are also accompanying notes on some of the packages which give information such as a requirement that the device must be jailbroken with a specific beta version of Electra in order to guarantee compatibility.

If you have jailbroken your device with Electra 1.0.1, or are thinking about going through the process now (How To Jailbreak iOS 11.1.2 Using Electra With Cydia [Tutorial]) that final version is released and stable for everyone, then check out the list of compatible tweaks below.