With iOS 10.3.2 now available to everyone, here’s the release notes and changelog details to show everything that has changed in this new firmware update.

Apple has today made iOS 10.3.2 available to the global public. Any iOS device owner with a compatible iPhone, iPad, or iPod touch is now able to download and install the latest release to that device, which in turn, means that they can immediately take advantage of any improvements, feature additions, or stability enhancements added to the firmware. 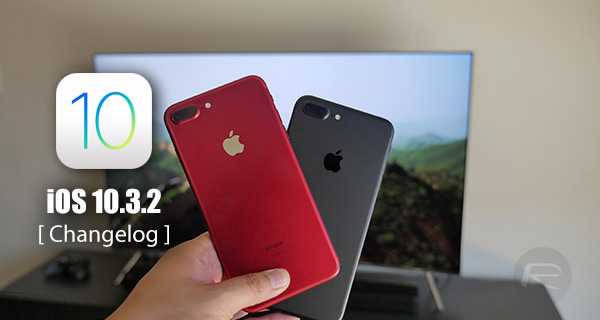 The iOS 10.3.2 beta process looked to have initially been executed in place of any iOS 10.3.1 release, but Apple quickly rectified that with an unexpected iOS 10.3.1 release bringing internal support for the company’s older 32-bit devices. It’s likely that iOS 10.3.1 was tested as part of iOS 10.3, and therefore didn’t require its own beta release.

But with iOS 10.3.2 officially out of testing, and now actually available to download and install, we can finally outline exactly what’s new and available.

As you might expect from what is definitely a very minor point release, there simply isn’t too much to shout and dance about with iOS 10.3.2. At least not from a new functionality or outward-facing feature perspective. In all of the betas which have preceded this release, Apple has shared the same set of release notes, giving us an indication of what its internal engineers have been focusing on. Those release notes have remained consistent throughout all releases, alluding to the fact that iOS 10.3.2 is about under-the-hood and internal improvements.

From a fix and improvement perspective, fans of Siri and those with a CarPlay-enabled vehicle or aftermarket fitted CarPlay head unit will take interest. Apple has made internal improvements to ensure that the “new SiriKit car commands should now work as expected.” This means that users can give verbal commands when in a vehicle and get the expected results returned. Apple’s engineers have also made some internal improvements to openURL protocols, with any third-party app now showing an alert requesting confirmation prior to any FaceTime, FaceTime Audio, or standard cellular call being invoked.

iOS 10.3.2 includes bug fixes and improves the security of your iPhone or iPad.

We have included the official release notes which accompany iOS 10.3.2 above, but for anyone who needs to be on the latest version of iOS, and who doesn’t care about sitting on a firmware version that can be jailbroken, then we would highly recommend checking out the release notes and then heading over to the Software Update mechanism and getting iOS 10.3.2 immediately.

Update x1: Apple has now posted full security content page for iOS 10.3.2, detailing each and every security fix which has been implemented in this latest iOS release: