Internet Based Sling TV Launched In The U.S., Here Are The Details

In a world dominated by cable and satellite TV, Sling TV has come in as the first true Internet based television service as an alternative to the more contemporary modes of content delivery. Sling TV has now gone live in the U.S., and is offering some amazing packages as part of its launch promotion. Details to follow right after the jump.

A product, rather subsidiary of the famous Dish Network, Sling TV is offering a variety of channels over the Internet starting at $20 a month, with the facility of a week-long trial, if you wish to test out the service first on your Internet connection and hardware. In this $20 core package, Sling TV has thrown in AMC as well which won’t be available at initial launch, but the announcement will be made once the channel is available in the coming weeks. The inclusion of AMC is likely to bring in more consumers, given the likes of The Walking Dead, Mad Men and more being aired on the channel. However Dish Network has also said that the AMC deal will also include channels like IFC, Sundance TV, BBC World News, BBC America, and WE TV, but these channels will be made available later when AMC goes on air. 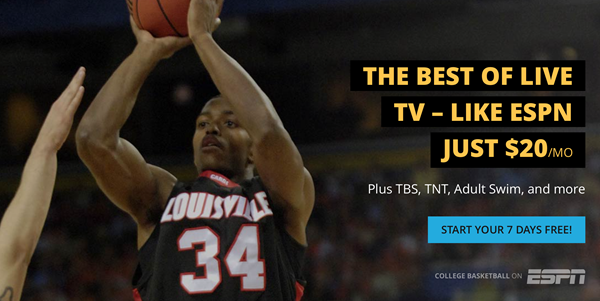 For $5 extra, users can gain access to SEC Network, ESPNews, ESPNU, Universal Sports, Univision Deportes, beIN Sports, ESPN Buzzer Beater, ESPN Bases Loaded and ESPN Goal Line, with the new ‘Sports Extra’ package. Sports channels, without the whole cable or satellite contract, is a huge plus indeed where they have been always limited to cable or satellite TV. WatchESPN is included with the $20 core package as well but "you can’t watch live TV on WatchESPN and Sling TV at the same time." Polaris+ channel from Maker Studios will also be headed to Sling TV soon enough.

Sling can be watched on the Web using a PC or Mac, iOS, Android, Roku players and Roku TV for now, but support for Amazon’s Fire TV and Fire TV Stick, Nexus Player, Xbox One, and more devices will be rolled out in the future.

Head over to Sling TVs website – sling.com – for complete details on the channels and packages available to users across the U.S. right now.