The clamor for iPhone 5 information is relentless, with rumor upon rumor coming out of just about anyone even remotely ‘in the know’. 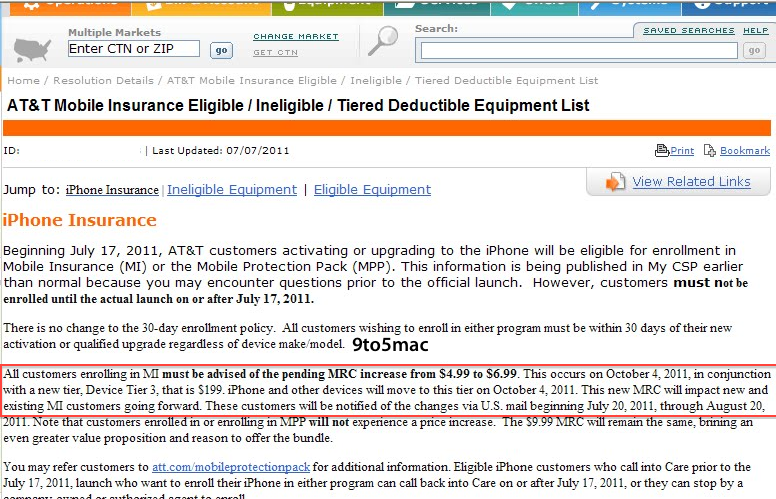 The latest rumor comes direct from Apple’s first carrier in partner for the iPhone in the Unites States – AT&T.

Our friends at 9to5Mac have gotten their hands on what appears to be an internal document explaining a price change for the company’s smartphone insurance. The document, titles ‘AT&T Mobile Insurance Eligible/Ineligible/Tiered Deductible Equipment List’ details a change in fee from $4.99 to $6.99, and this will happen in conjunction with a new tier being created – a tier for devices costing $199.

This otherwise unremarkable date – a Tuesday – could point to AT&T adding a new device to their insurance schemes, with the claim by 9to5mac being that the mysterious iPhone 5 will be that device.

The site does urge caution though, as until Apple announces a date, we’re all just really guessing.

While light years away from a new iPhone launch date confirmation, it could be a sign that new iPhones will hit AT&T in this timeframe.

iPhone and other devices will move to this tier on October 4th, 2011

That being said though, an October release does make sense for Apple.

With iOS 5 steadily moving through the beta stages while beta 3 already in the hands of developers, and Apple having already given a release date of September for its new smartphone operating system, it’s not too far a stretch to believe Apple would have new hardware to go along with its software. Looking back at history also shows that major software releases are indeed accompanied by new hardware, iOS 4 along with the iPhone 4 last year for instance.

The specific mention of the iPhone in AT&T’s document also points to new Apple hardware, though we could be clutching at straws at this point.

Now we at least have a tentative release date for the next iPhone, we can get back to trying to work out other important details. What will it be called? Will it feature a whole new industrial design? What about 4G, carriers, colors?

We do love a good ‘guess the phone’ competition here at Redmond Pie, and we can’t help but think we’re in for a few more twists and turns before the end of the iPhone speculation this year.