The popularity of powerful and extremely capable mobile devices like tablets and smartphones has risen exponentially over the last few years and things like keeping in touch with friends and colleagues via email, instant messaging or texts has never been easier. It has also meant that we are now free to delve into our favorite game no matter where we are or quickly access news bulletins from all over the world without so much as a second thought. But what does it mean for our professional productivity?

Being almost permanently connected to the internet with a powerful device like the iPad or an Android tablet surely means that those professional individuals are free to create, edit and share documents with colleagues and clients no matter where they are, right? In a way yes, but due to the fact that most organizations use Microsoft Office, it can sometimes be problematic to get the full access required, considering Microsoft haven’t actually released Office for the iOS platform. Of course, there are alternatives that are capable of reading the required file formats, but they are all lacking in some form and they just don’t offer that consistent flow which companies are looking for. 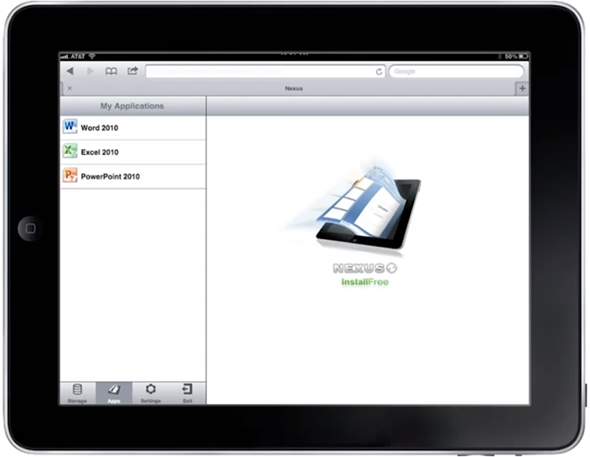 If you’ve found yourself in this predicament, tried all of the alternative options such as OnLive Desktop and the various office type third-party creations that dwell within the App Store then it may be time to accept that virtualization may be your best friend and look at the new InstallFree Nexus option. Whenever there is a lack of an official product, like in this instance, it’s generally accepted that a virtualized offering is the next best thing, and Nexus has exactly that on offer with their Office 2010 suite that is available over-the-net and is fully compatible with the Mobile Safari browser that ships with the iPad. 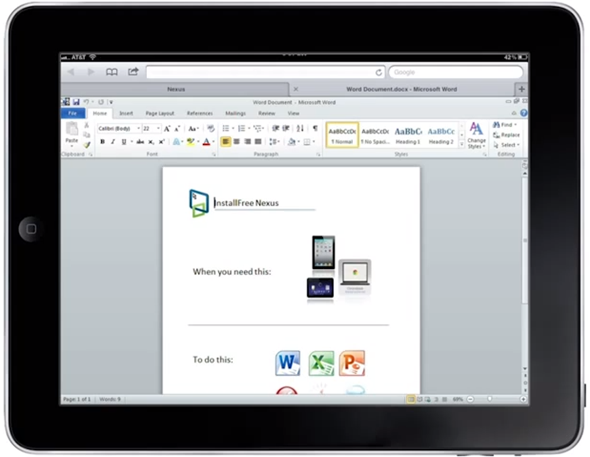 One of the great things about Nexus is the fact that it offers users the ability to create and edit Word, Excel and PowerPoint documents as well as interact with third-party sharing services such as Dropbox and the increasingly popular Google Drive. The Office 2010 suite within Mobile Safari also responds to a number of extremely familiar gestures, such as three finger tapping to invoke a keyboard, pinch to zoom out and one or two finger dragging gestures to scroll the document.

Nexus is planning on bringing the InstallFree service out of beta at some point during this month and will ultimately offer a free basic package that integrates with storage services as well as full access to what used to be OpenOffice suite of apps. An additional premium service that offers a full Office 2010 subscription license will also be available for $49.99 per year for those in academia or $199.99 for a standard license.