What could possibly be better than an iPhone screen protector that is designed to offer the maximum protection to the display of the device that you’ve shelled out a ton of money for? How about a screen protector that is manufactured in such a way that it can actually provide the illusion of healing itself when it receives a scratch? We’ve come a long way since the early days of simply applying a protective film over the top of a display, with the Innerexile self-repair screen protector being a perfect example of just how much the accessories market has progressed.

One of the great things about the Innerexile offering, is that for a relatively low financial outlay it can actually provide a lot more longevity over other accessories that purport to protect the display on Apple’s iPhones. This particular product is manufactured in such a way that it contains a coating of microcapsules over the top of the film. The magic here is that these excellently-named microcapsules contain an adhesive-based liquid that is almost like glue. If a scratch is detected on the protector, then the microcapsules go to work in “repairing” it. 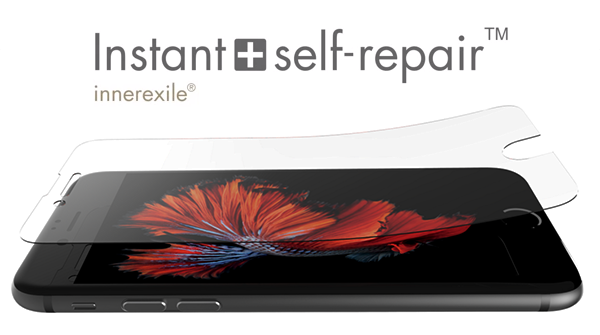 Ok, so we aren’t talking about anything supremely advanced here. This protector doesn’t have the ability to actually regenerate when it gets damaged. The adhesive-like liquid contained with the microcapsules does however exist to flow into any scratch that appears on the screen protector to fill in the voids and give the illusion that it’s actually healing. Not a bad little trick for a screen protector that costs less than $30 for the latest iPhone 6s and iPhone 6s Plus smartphones. As you might expect, there is a small trade-off to consider before purchasing.

The layer of microcapsules that provides this protector with its magic is not an infinite resource. Meaning that when they’ve been used up, any inflicted scratches on the film will be left visible and unsightly. With that said, those who generally take care of their expensive smartphones, and who are careful in avoiding knocks on their phones, including not placing it with sharp items in pockets and the like, should expect to have a fairly pristine protector that should last longer than most of the competition in a similar price range.

The Innerexile screen protector will cost you $23.99 if you have an iPhone 6/6s, or $25.99 for the larger iPhone 6/6s Plus, and is available for pre-ordering right now, with shipping expected to begin from November 3. Details on where to purchase the screen protector from can be found from innerexile.com.

The company also has a video showcasing the magical properties of its instant self-repair tech, and comparing it to the LG G Flex 2’s self-healing back cover. It can be seen below.