LG’s decision to design, manufacture and release a smartphone with a curved display may seem like nothing more than a gimmick to some consumers. But LG themselves will understand that the existence of a curved display on the G Flex is initially nothing more than a novelty, but while it doesn’t bring any real substance to the device the same can’t be said for the self-healing properties of the rear case. One of our biggest fears of smartphone ownership is scratching it almost instantly. Thankfully, it seems as though LG has eradicated that issue with the G Flex, which as the video shows, can even recover from a malicious knife gash.

First and foremost, we would never recommend picking up a brand new smartphone, pulling out your pocket knife and purposely damaging the outer case. To prove the validity of LG’s claims, and to prevent us from having to destroy our own property, YouTube broadcaster Marques Brownlee has uploaded a video that shows the healing capabilities of the device in action. Rather than settle for general scratches that occur during transport in a user’s pocket, Brownlee has gone to town on the rear of the Flex using a set of keys and a rather vicious looking knife. 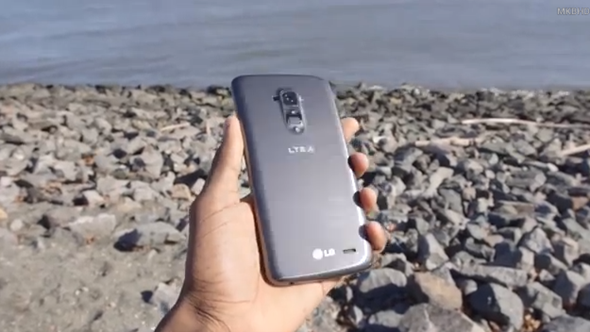 It’s quite astonishing to even imagine a rear-shell of a smartphone that heals itself let alone watch the whole regeneration process take place. After digging into the shell of the Flex with a set of keys we can watch in amazement as a relatively small set of scratches heal themselves in literally minutes. The deep gash that was inflicted with the help of the knife takes a little more effort and applied friction to actually get it to “heal”, but while the results aren’t entirely perfect they are still remarkable when you consider what is actually happening.

It seems that the ability for the Flex to self-heal isn’t just advertising chatter to sell a few additional devices. Watching the process in action makes us excited about the future of handheld devices, and at a minimum has convinced us that more manufacturers need to include this type of healing functionality in their handsets.