Hulu is launching its much anticipated live TV service today, with those who are part of the beta, able to pay $39.99 for the privilege of testing out the company’s new offering.

For their $40 users will get access to over 50 channels each month, with some of the biggest names in TV all present and correct including ABC, CBS, FOX, NBC and local affiliates, ESPN, CNN, Cartoon Network/Adult Swim, FX, USA Network. 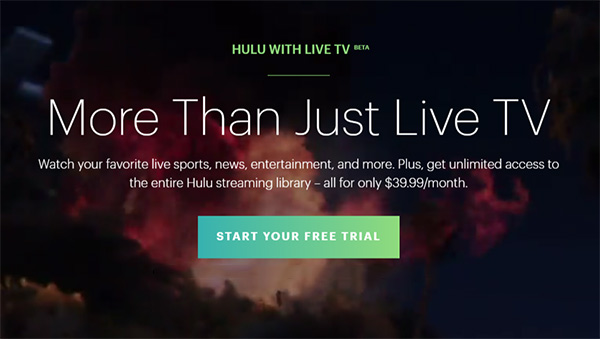 Fans of HGTV, Travel Channel and Food Network will also be pleased to learn that Hulu has signed a deal with Scripps Network Interactive which will see those channels also become part of the package. Hulu With Live TV was announced during a New York event which was held for press and advertisers to get the lowdown on what the new service has to offer.

With the standard Hulu With Live TV subscription, users will have access to six individual profiles, with those profiles able to view two streams simultaneously cumulatively. Users will also have 50 hours of DVR storage available to them, although they can pay for more storage by handing over another $14.99 per month. Those who want to be able to watch unlimited simultaneous streams can do so too, again for another $14.99, although both unlimited storage and simultaneous streams can be bundled together for $19.99.

Hulu confirmed that subscribers to its live TV service will initially be able to watch via their Xbox One, Apple TV, iOS, Android and Chromecast.  The Roku, Amazon Fire TV, Amazon Fire TV Sticks, and Samsung Smart TVs will also apparently receive support in due course.

Google, AT&T, Sony, Sling and others have already joined the growing market of companies offering live TV via streaming services, and with Hulu joining the game and Apple perpetually rumored to be trying to do the same thing despite road blocks apparently being put up by content providers, the days of getting TV via satellite or cable are still here, but ever closer to phasing out for good.