We have seen in the past that developers who push their packages to Cydia seem to go through trends relating to the parts of iOS that they enhance with their creations. We have seen this with Notification Center and Siri based tweaks, with the trend seem to be erring towards the iOS device lock screen in recent weeks, with developers launching tweaks such as Unfold, Unlockize and PaperLock. 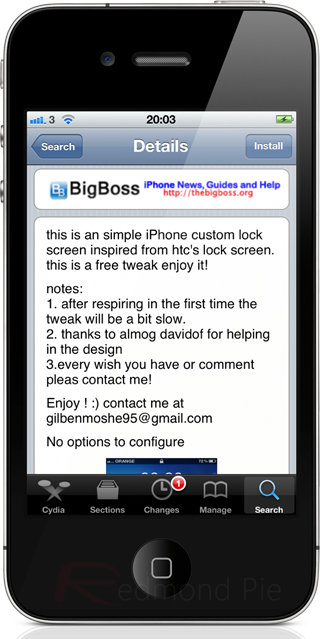 One of the latest to land in Cydia comes from developer Gil Ben Moshe and takes most of its inspiration from the lock screens found on an Android based HTC device. That level of inspiration is either a good thing or a bad thing due to the fact that some people love the interface designs that HTC produce, whereas others simply cannot get away with it. I personally happen to sit right in the middle of the fence and while I recognize the benefits they provide, I am also a big fan of the native simplicity that iOS has with its slide to unlock action.

HTCLock pretty much does exactly what it says on the bin and hooks into the device’s lock screen to change it aesthetically which give it more of an HTC look and feel. Not only are the visuals changed, but it also adds three alternative unlocking options to the lock screen. After installation, users will be faced with a chrome semi-circle at the bottom of the device with four circular icons placed on the screen. For those that haven’t used an HTC device before, the idea is to drag the semi-circle from the bottom of the display and drop it onto the action that you want to occur. 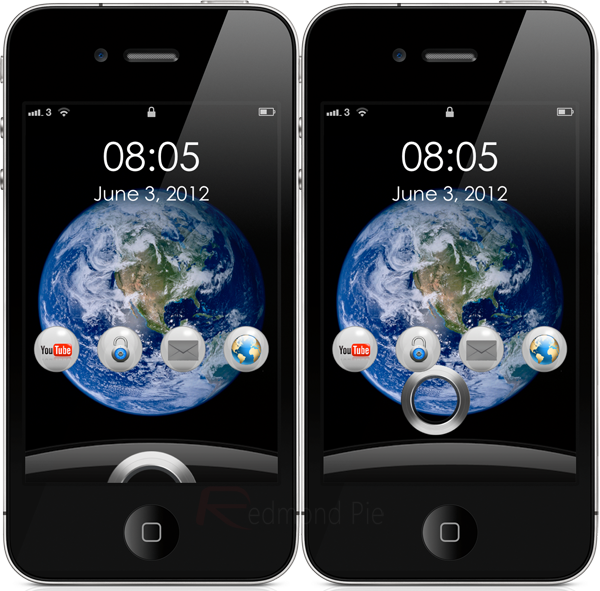 With the current version of HTCLock, users can either choose to unlock the device, open up the YouTube application, go directly into an email composition or surf the world wide web through Mobile Safari. Through my rigorous testing of the tweak I found it to work extremely well and it felt very smooth on a jailbroken iPhone 4S running iOS 5.1.1. HTCLock comes with no additional Springboard icons and has no configurable options which is a shame considering users are stuck to the three additional options that the developer has chosen.

In its present form and considering it is free of charge, HTCLock is a very nice alternative to the iOS stock way of unlocking the device. It would be nice to see the developer introduce some additional and more powerful options such as giving users the ability to set their own actions to occur from the lock screen rather than having to live with Web, YouTube and Mail, but only time will tell if this gets implemented. HTCLock is available as a free of charge download from the BigBoss repository with no specific mention of iOS version requirements.