How To Show iMessage Typing Indicator In Status Bar On iPhone

The Cydia Store is a treasure trove of useful tweaks, and whereas last week we showed how you could remove the ‘typing’ icon to prevent your correspondent from knowing you’re typing a message, today arrives tweak which helps you utilize that very feature, but in a broader sense. When in the Messages app, or indeed in a conversation with somebody on iOS, you can see when they are typing a message back, but if you’re at the home screen, for example, you’ve no way of knowing who may be just about to send something through. TypeStatus allows you to do so by adding that same ellipsis / speech bubble icon to your status bar whenever anybody is typing a message to you.

Many aspects of iOS, it has been claimed, haven’t progressed as much as they ought to have during the last five-and-a-half years, and whilst I would subscribe to this notion to a degree, the Messages aspect has certainly come on in leaps and bounds. The iMessage platform allows a message to quickly and efficiently be sent between any up-to-date iOS device or OS X machine, and is something we use here at Redmond Pie every minute of the day, but in terms of features, the Messages app is still lacking.

This tweak, while not much, is the kind of addition that makes the whole system just that little bit better. It doesn’t purport to transform the messaging experience for the better (besides, there’s already BiteSMS for that), but it slots in nicely into the iOS ecosystem.

The idea is pretty ingenious, and although the status bar doesn’t have enough room to facilitate such a feature, it would be wonderful if, say, the initials of the person sending the message could also be placed alongside the speech bubble. Nevertheless, this is a great little tweak for those constantly locked in conversation, and is available to download over at the BigBoss repository right now. 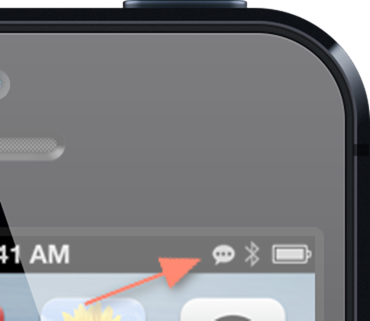 It’s absolutely free of charge, and as you might imagine, there are no configurable settings. Just install and respring; and if you don’t like it or no longer wish to have that icon on your status bar, simply pop back to Cydia and uninstall.