How To Rename Messages Thread In Stock iOS 7 App

Instant messaging apps are ubiquitous, but although we all have our favorite third-party utilities such as WhatsApp, Skype, and others, the stock Messages app for iOS still gets plenty of use. This goes a long way to explaining why we have currently such a large count of tweaks being made specifically for Messages, and while there are swathes of great, powerful, and robust tweaks for this very purpose within Cydia, sometimes, we only want to make a subtle alteration here and there. MessageRenamer7 falls squarely within this category, allowing you to tidy up your list of messages by renaming them to whatever you like.

One of the great features of iMessage, which first came about with iOS 5, is the fact that you can have group conversations going, and you’ll find that if you have several going at any one time, it can be rather tedious trying to discern between them. This is where a tweak like MessageRenamer7 could come in particularly handy, allowing you to easily apply a different label depending on the group of people (perhaps a nickname related to the friends therein), and keep things looking relatively organized.

The tweak has long since been around from iOS 6, and has just been updated for iOS 7. The tweak has been re-written from the ground up for the new firmware according to the release notes, and also features 64-bit support.

While the old version was, and still remains free of charge, the developer is asking for 99 cents from those on iOS 7. If your Messages app is looking a bit unkempt and you’d like a way to establish a degree of order, this tweak offers a perfect solution, and having been optimized for the wave of new devices, should offer a slick, stock-like experience from the onset. 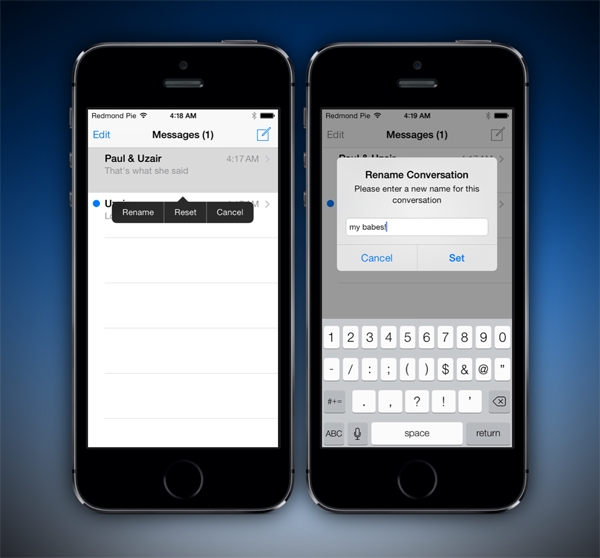 MessageRenamer7 can be picked up from the BigBoss repository in Cydia, and as aforementioned, costs one cent shy of a dollar. To locate it, simply open up the Cydia app on your home screen, tap on search, and type in MessageRenamer7.