Dell is one of the foremost manufacturers of desktop computers, notebooks, monitors, and other such peripherals based around computing. In recent years, it has tried with a notable amount of gusto to tap into the hybrid market, with some success. But in an ad for its latest laptop-plus-tablet, it makes the cardinal sin of showing both Windows 8 and OS X at the very same time. With a simple sideways gesture, the user seems to move from the Start Screen to a Mac app, and although there are ways of running both of these operating systems on one machine, Dell certainly didn’t intend to market this fact to the world.

Dell’s business in the computing encircles Microsoft Windows, and so while this video does, to all intents and purposes, showcase a genuine Windows experience, certain parts of the demo reveal a conspicuously OS X-like title bar.

It’s a strange scenario, and it’s hard to determine whether a couple of the guys creating the ad for Dell decided it would be funny to throw a few Mac screens in there, or were just simply unaware  / too lazy to find something else to fill the display with. 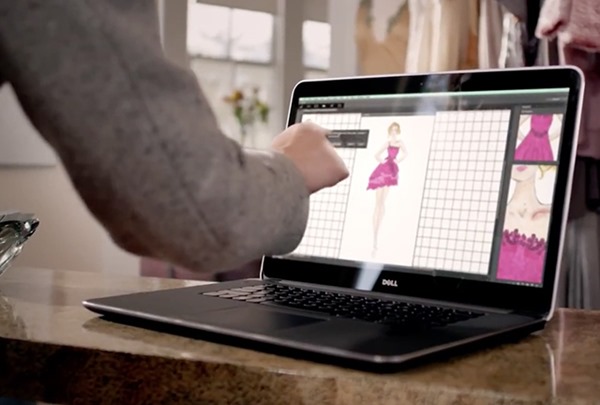 Either way, with an otherwise well-choreographed advertisement to show for the Dell’s XPS 15, it is a pretty embarrassing slip-up, with the fact that Dell has hastily removed it from YouTube being a testament to that.

It should be noted that the Dell’s XPS 15 is indeed a Windows 8 notebook, and with OS X being the main competitor to Microsoft’s flagship OS, it’s not ideal for it to be borrowing freeze-frames from apps of its adversary.

Still, the guy who spotted it over at The Verge forums certainly had an eagle-eye, and you do have to watch rather closely in order to see the discrepancy.

What do you think? Would a Dell that could effortlessly flit between OS X and Windows appeal to you? Or should these two fiercest of rivals remain separate in every sense of the word?

Jokes aside, here’s the video that has been abruptly pulled from YouTube after hitting the headlines for the wrong reasons; Make of it what you will: