How To Remove / Uninstall iOS 9.3.3 Jailbreak From Your iPhone Or iPad The Right Way

As we all know by now, the iOS 9.3.3 jailbreak tool has been released to the public by the ever productive Pangu Team, meaning that all of 64-bit iPhone, iPad and iPod touch devices running iOS 9.3.3-9.2 firmwares can be jailbroken.

If you’ve already taken the decision to liberate the device from Apple’s walled garden, but for one reason or another have decided that the jailbreak really isn’t for you, then it is, of course, possible to remove it from the device altogether and get back to a clean stock version of iOS. 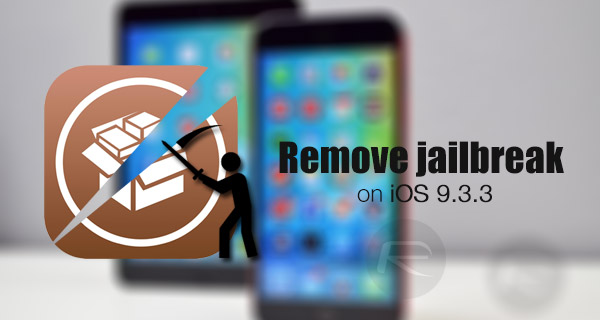 Saurik’s Cydia Eraser used to make this really simple to do, but its current lack of support for iOS 9.3.x means that we have to fall back to older, more rudimentary methods, and yes, that means going back to the Mac/PC and iTunes combination for restoring the firmware. Here we’ll detail on how to go about removing the Pangu/PP jailbreak from your iPhone, iPad or iPod touch device the right way. Make sure you have a backup saved to iCloud or iTunes before going ahead with this. Ready?

Step 2: Next, disable Find My iPhone on your jailbroken iPhone, iPad or iPod touch device from Settings > iCloud > Find My iPhone and then connect the device to your PC or Mac via USB.

To put your device in the Recovery Mode, ensure that the latest version of iTunes installed on your computer is open, and the device is connected, before pressing and holding the Home button and Power buttons together until an Apple logo appears followed by an iTunes and Lightning cable logo.

Step 4: iTunes prompt, as shown below, should confirm when the device has successfully entered Recovery Mode.

Step 5: Now from the iTunes interface, hold the Option key on the Mac, or the SHIFT key on a Windows machine, and then press the “Restore iPhone…” button, as shown in the screenshot below. This will result in a prompt asking you to select the firmware file to restore to. Select the firmware you downloaded in Step 1 and let iTunes restore that firmware onto the device to provide a fresh, clean install of iOS 9.3.3.

When completed, iTunes will show a new screen welcoming you to the newly restored iPhone or iPad.

And, as they say, that’s all she wrote. The iPhone, iPad or iPod touch in question will now be running a fresh, clean install of Apple’s latest firmware, with no sign of the previous jailbreak in sight. Of course, that means that there will be no ability to run Cydia or install packages that aren’t otherwise accessible via Apple’s official App Store. It does however mean that the device is still capable of being jailbroken once again if the urge takes over.