Personalizing your mobile device to your liking is still one popular idea, and a lot of people spend quite a good amount of time setting their phones up with the right wallpapers, themes, graphics and audio effects. Of course, as the smartphones have evolved, so have the customization means, but that still doesn’t mean that the old things have lost their touch. I remember back in the day of Nokia devices when monochord ringtones were the rage, and being able to compose your own ringtone was the height of customization that you could’ve gotten on your phone (along side the funky carrier logo on the monochrome screen of the Nokia 3310).

Today, our mobile devices are capable of playing high-quality audio through capable speakers, and even utilize audio engines like Beats Audio and Dolby Mobile for spectacular output. That change the ringtone scenario quite significantly, because you can actually set actual recordings – music or your own – as a ringtone. Now, the only problem is, where to get these ringtones? While there are loads available on the internet to download and use (and some even for free), it’s always nice if we could keep things in our own hands. Hence, making your own ringtones has been possible for a long time, albeit using a PC. Well, Ringtone Slicer for Android is one app that will let you create high quality ringtones from your music library right on your device itself, and without needing any special tools. 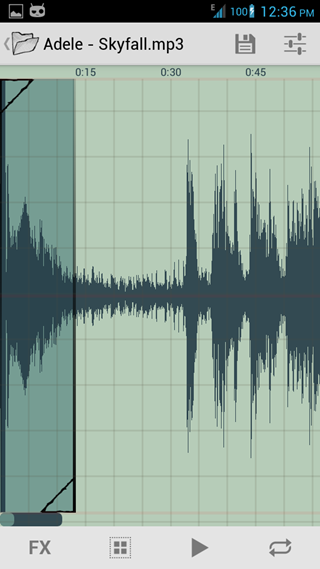 The application is basically an audio editor, with a focus on using the edited files as ringtones. However, you may find more uses beyond just the obvious one. Alarm tones and notification alerts can also be generated using the app, as there is virtually no limit to the time that you can trim an audio track down to. The app comes with a built-in file explorer that quickly lets you browse to the target audio files (supports MP3, AAC, WAV and AMR). 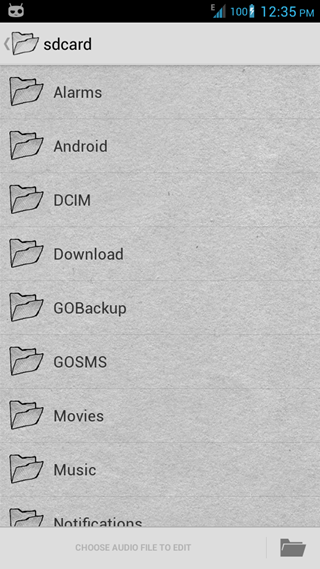 The interface of Ringtone Slicer is really easy to navigate and aesthetically pleasing, without much fancy controls. Being a customization supportive app, it would make sense to give the app theming support itself, and the developer seems to have thought of that. Hence, you can change the appearance of Ringtone Slicer itself as well. Then, the app sports an intuitive interface with gesture support for fine control over the ringtones that you’re creating.

Overall, Ringtone Slicer is a good addition to Android’s arsenal of customization apps. It’s in beta as of this review, so a few bugs could be expected, although I didn’t come across any during my testing. The developer promises more improvements going forth, including enhancements like fade in/out effects, volume adjustment, compression etc. It’s definitely worth a download if you like tweaking your phone to your liking.