Samsung’s Galaxy Note and Galaxy Note II were two devices that redefined how the world viewed smartphones. The Dell Streak had been perhaps one of the original phablets (phone + tablet), but the Note lineup’s revolutionary design, hardware specifications, and the exclusive S Pen stylus made it something much more than any of its predecessors. Add to the fact that the device was produced by the famous Korean manufacturer that had already made for itself a towering reputation with droids, didn’t hurt the device’s success in any way. If you think about it, the Galaxy Note is a complete winner in almost all aspects, except for the large size (which is completely a matter of preference and opinion, by the way).

One of the prime features that set the Note lineup apart from others, was the S Pen stylus, and the way it could be used anywhere within the operating system. Samsung spent a good deal of time and effort highlighting this particular gain in Note’s advertisements, to be honest. Not only did this cause the envy of a lot of users, but also sparked some creativity in others, hoping to bring a similar solution to non-Note devices as well that didn’t feature an S Pen. The new app for Android, Ink Over Apps, comes exactly from the same mindset. In a nutshell, this app will allow you to draw, mark up, write and annotate over any app in your Android device, take a screenshot, and use it in the same way as the Note’s stylus would have you operate. 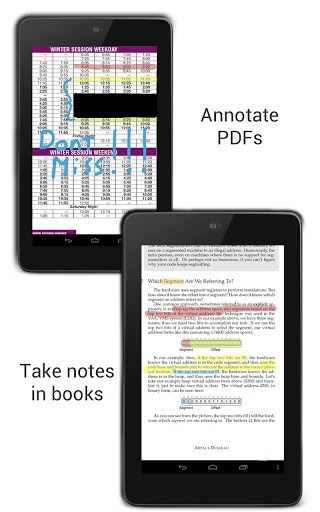 Since Ink Over Apps relies on Android’s native screenshot functionality, it will only work on all devices running Android 4.0 or above. When running, the app resides in the notification shade, and hence, can be invoked anywhere where you need it. The nature of this app makes it suitable for both Android phones and tablet devices, where in the latter, it can be even more useful owing to the larger screen real estate. 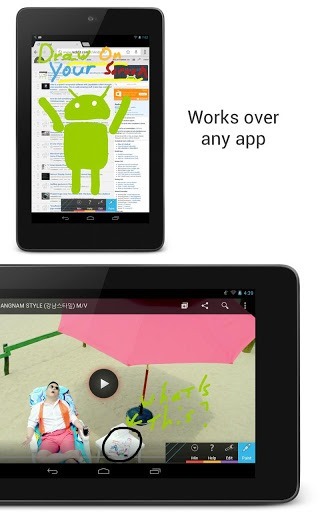 Use cases for a tool like Ink Over Apps can be numerous, and limited only by your own creativity. However, the app does pose slight issues in some areas. For instance, you cannot use the pinch-to-zoom function in any app while drawing over it. We understand the limitation, but imagine the usefulness being hampered if you were trying to, say, trace a route over a map, where zooming is almost always inevitable. The developer may want to look into that for future releases, as I find that to be a pretty necessary addition.

Ink Over Apps costs a mere $0.99 in the Google Play Store.

(Source: Ink Over Apps for Android on Play Store)