Mobile devices like smartphones and tablets mean big business across the world, which in turn means that apps which are developed and submitted to marketplaces like the iOS App Store and Google’s Play Store for Android are also capable of turning up large amounts of money for the developer as well as the operating system owner. We already know that Apple turns over a substantial amount of money from their 30% cut of App Store sales, which is enough for them to break even and provide an app economy that effectively doesn’t cost them a dime to run.

One of the great things about the App Store is the different channels where users have to procure apps. Apple IDs that have credit or debit cards associated to them can purchase apps directly, alternatively for those who aren’t old enough to operate in this way, there are options to purchases iTunes gift cards or have software gifted to their account by others on a per-app basis. We have been hearing some speculation recently that Google is going to be extending their purchase options to include Google Play gift cards, with a leaked internal memo from Target all but confirming that those cards will be available later this month.

The leaked image comes directly from a photograph taken of an internal system within Target, who, let’s be honest don’t have the best track record of keeping confidential things a secret. The note was sent out ten days ago with the title of "Google Play Cards Unavailable Until 8/26" and outlines the issue to employees as well as the relevant action to combat that issue. It seems that the Google pre-paid card has been assigned an internal part number of 276-04-0013 and will be hitting shelves in their own stores and in other vendors on August 26th, which is when Google has given the green light for the release. 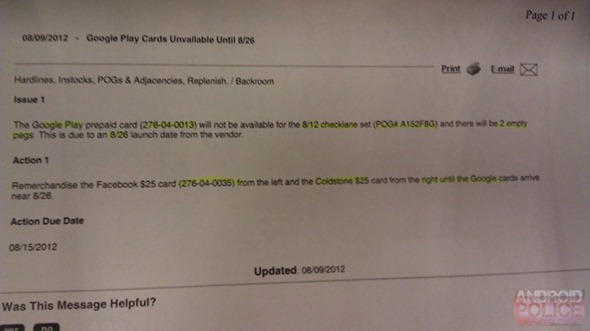 It seems like Android users have been waiting for quite some time for the release of these gift cards, and while it’ll probably remain unknown if this release date has been put back for internal reasons, it is definitely a great piece of news that lovers of the Android operating system will soon be able to make purchases from the Play Store through these cards.