Google has come in for quite a bit of bad press over the past few days thanks to the display used in its Pixel 2 XL smartphone. There have been numerous “issues” highlighted with regards to the display and the way it looks, and now Google’s Seang Chau and Mario Queiroz have defended the Pixel 2 XL’s display in two different Pixel User Community forum posts.

In those posts, they explain why colors can appear muted, as well as addressing the blue shift many have experienced when the device is held at particular angles.

Both the Google Pixel XL 2 and Pixel 2 are apparently set up to display the same colors, meaning that “out of the box, the Pixel 2 XL display defaults to sRGB + 10%. This is the sRGB gamut, expanded by 10% in all directions to make it slightly more vibrant. Humans perceive colors as less vibrant on smaller screens, such as on a smartphone, so we chose this for aesthetic reasons.” This means more accurate colors than other phones might offer, even if they do arguably look “better” as a result of their blown out colors. Chang did also suggest that Google will be adding a new mode that offers more vivid colors as part of a software update, however.

Not convinced by Google’s assurances that nothing is wrong? Google has your back because it has also confirmed that all Pixel 2 and Pixel 2 XL smartphones will now come with a 2-year warranty from Google as standard. That added peace of mind is surely a welcome one for everyone, whether you feel impacted by the screen “issues” or not.

As for the blue shift apparent on the Pixel 2 XL, it is very similar to that of last year’s Pixel XL, though it does appear to be more severe this time around. However, Google’s Chau has still offered an explanation of what is going on.

We want to add some info regarding the blue tint that some of you have been asking about. The slight blue tint is inherent in the display hardware and only visible when you hold the screen at a sharp angle…All displays are susceptible to some level of color shift (e.g. red, yellow, blue) when viewing from off angles due to the pixel cavity design. Similar to our choice with a cooler white point, we went with what users tend to prefer and chose a design that shifts blue. 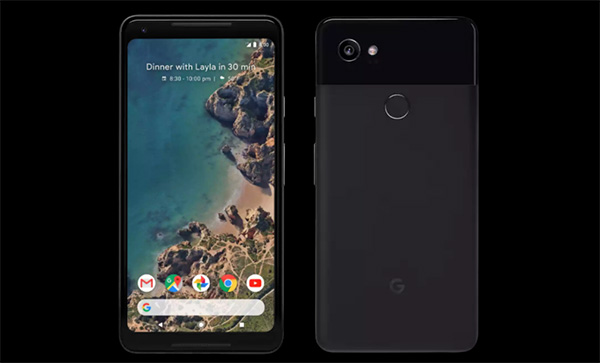 A possible short-term solution to the issues above might be to give the app Oreo Colorizer by ShoftFuse a try. In lieu of a Google software update, this app adds some color intensity to what the Pixel 2 XL displays, giving it some of that pop that the competition is so famous for. This app is at least a viable option while we wait for Google to provide a software update that does very much the same thing.

As for screen burn-in issue of the OLED panel that many have been noticing after using the phone for only a week, Google says it will be making software adjustments to make some UI elements light in color with some fade-out animations to avoid this problem in future.

Last but not the least, if you have been hearing clicking sound coming out of your Pixel 2 or Pixel 2 XL randomly out of nowhere, Google says it’s working on a software update to fix the problem. Those who can’t wait for the software update to arrive though can temporarily get rid of the problem by turning off NFC in Settings > Connected devices > NFC.