Samsung’s Galaxy S4 is the company’s current flagship, and since its release in the spring, many millions of units have been sold. With so many in the wild, it’s only natural that some should develop faults, but with all the extensive testing carried out by Samsung to ensure that users aren’t put in any danger, GS4 owner Richard Wygand was stunned to wake up next to his device bellowing smoke and flames.

These incidents are few and far between, and often occur when a charger or battery has been obtained cheaply. These products are seldom run through even the basic safety checks, and with reports of houses burning down from shady chargers found on the black market, even Samsung’s rival Apple has taken action in allowing folks to trade in for an official charging cable and a small fee. 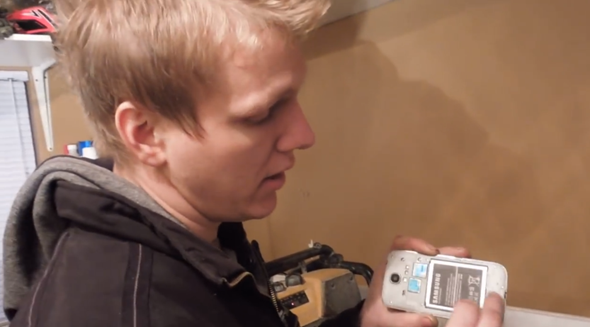 But Wygand was just an unfortunate case, and having been rudely awoken by the smell of a smoldering gadget, he naturally did what anybody else would do and contacted Samsung in pursuit of a replacement. Unfortunately, Samsung wanted to play hard-ball, requesting that Mr. Wygand send in a video to corroborate his claims, and when he duly obliged, he also decided to post the clip up to YouTube.

From a PR point of view, it would definitely have been better if Samsung had sent a guy round to Wygand’s house, collected the device, and given him a new one without any kind of fuss. But now, it has opened a can of worms, and with the video going viral, Samsung has tried to cover up the situation by silencing the owner of the device.

The South Korean outfit promised that they would replace his burnt handset with a ‘similar model,’ provided that he deleted the YouTube clip, tell nobody about it, and basically forget that the situation ever arose. Samsung’s tactless act has backfired greatly though, for the video, as well as a new video of Wygand venting his frustrations, has also been uploaded. And guess what? In pure Internet fashion, both of them are going viral as we speak.

You can check out both videos below, and be sure to let us know of your thoughts by dropping a comment via the usual channels!

Thanks, John for sending this in!