Christmas is certainly nearing, and the twelve day countdown is fast approaching. Many of the major companies in tech are expected to join in the festivities to varying degrees with a bunch of special offers and deals, and Microsoft has kicked things off by announcing its own two-week promotion on a myriad of products. The deals begin today and run through to Friday next week, so if there’s a product that you’ve had an eye on, check the full list below.

Although the twelve days of Christmas hasn’t officially started yet, the Redmond company is keen to get you shopping in Microsoft Stores and on its official website. This month is the most pivotal for most technology companies, and Microsoft’s promotion will see a new offer every single day for the next 12 days.

As well as offering a single product every day with a reduced price compared to usual, there are also special ‘door buster’ offers to be had by those willing to queue for the greatest deals. The door-busting savings are significantly lower than the general deals, but they are also limited to a strict number of the first 20 customers, so if you’re really keen on getting an HP Envy 15 for just $499, then you will probably need to pitch a tent outside a Microsoft Store next week Friday. 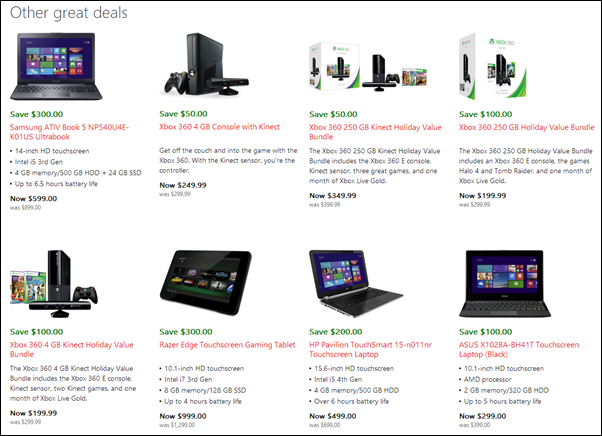 As well as deals on tablets and smartphones from Dell, HP, Nokia and more, there are also some pretty significant reductions on services, video games and peripherals. Next Sunday, for example, a one-year Xbox Music pass can be had for $29.99 if you’re among the first 20 customers to enter the store upon opening, and even though the offer of $69.99 is available throughout that day, it really does pay to be an early bird.

If you, for some reason, haven’t gotten a hold of Grand Theft Auto 5 just yet, you can grab your copy for the Xbox 360 for the fantastic price of just $19.99 if you’re a door buster this Friday, and even if you do miss out on being among the first customers, the game can still be purchased for $39.99 throughout the entire day.

Check the guide below for a full run-down on Microsoft’s offers over the next two weeks. 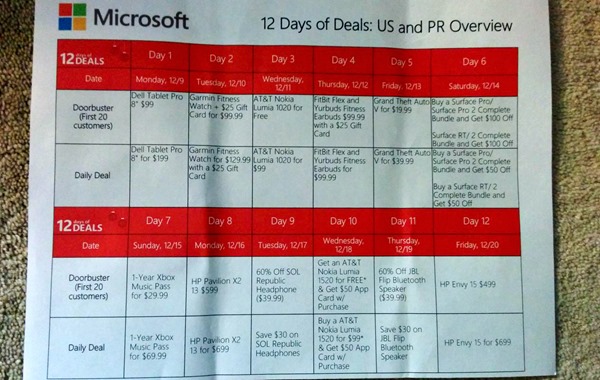