Apple is not unfamiliar with the process of receiving accolades, and after a year of breaking records and hitting targets through 2014, is very well-placed to exceed expectation this year as well. While there are plenty of components keeping the Apple gravy train in motion – from design guru Jony Ive right down to the Genius Bar staff at the company’s retail outlets – CEO Tim Cook is the head honcho; the leader of the operation. He’s seen as one of the world’s most influential figures, not just in technology, but in numerous fields such as equality of opportunity and philanthropy, and today, has been recognized as the world’s greatest leader.

Seeing off competition from a wide range of inspirational individuals, from the visionary Elon Musk to ex-basketball star Yao Ming, Tim Cook has taken the crown as FORTUNE’s greatest leader. The annual list aggregates the world’s 50 greatest leaders taking into consideration a myriad of factors, namely “effectiveness and commitment and for the courage to pioneer,” and while the likes of Musk, Jeff Bezos and indeed Cook all fit the CEO bill, the countdown spans a broad selection of leaders with very differing qualities.

Given that Apple is the world’s most expensive company, while also maintaining a presence in the effort to preserve environment, offer parity of opportunity in the workplace and put an end to poverty, it’s regularly highlighted as a prominent example of how a company should be run. Therefore, one can see why Cook, who’s definitely put his own stamp on things since taking over from the late Steve Jobs, deserves a considerable amount of credit.

Indeed, FORTUNE elaborates on the reasoning behind Cook’s selection, noting that he has “led Apple so strongly, including in some surprising directions,” while the “stock has hit all-time highs.” The aforementioned socially-related issues, including his coming out, has, if anything, broadened his influential horizons, and looking at all he and Apple have achieved in the recent past, it’s hard to begrudge Cook this award.

As well as Cook, (Mark) Zuckerberg, Musk, Bezos and Ming, the likes of Starbucks CEO Howard Schultz and music industry darling Taylor Swift also made the top 50. It’s an eye-opening list that offers a well-rounded perspective on those making a real difference, and for those interested, here’s a snapshot of the complete top 50: 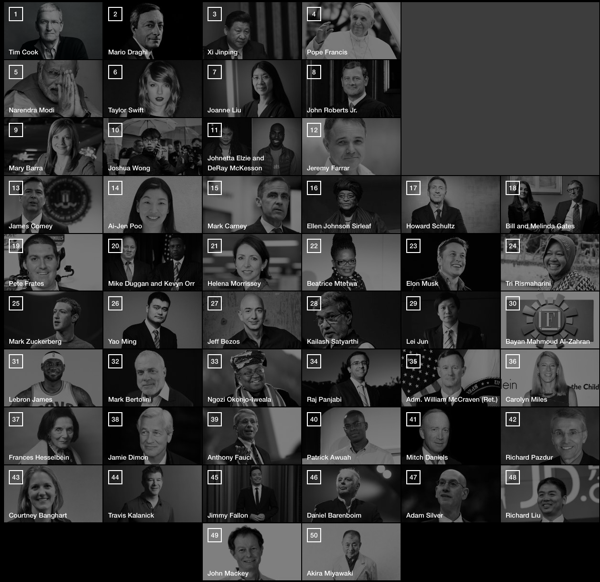