Samsung has been working on something akin to a foldable smartphone for years, and while leaks have been few and far between, the company hasn’t exactly been keeping the secret particularly close to its chest.

Samsung heads have spoken about a foldable phone potentially being shown off before the end of the year, and now it looks like we have our latest confirmation that Samsung is going all-in on foldable designs, with a patent application being granted for a foldable tablet.

Samsung’s testing of flexible OLED screens is no secret and the latest schematics found as part of the patent application do look very similar to those that have appeared in more smartphone-like forms before now.

Samsung’s DJ Koh has called its foldable phone a hybrid in the past, transitioning from smartphone to tablet and back again as the user’s requirements demand. That does obviously give us enough room to wonder whether we will see one foldable device, or two. We’d suspect a foldable smartphone is still in the works, with a larger tablet-sized variant also in the pipeline. Neither are likely to be inexpensive, no matter which way you slice it.

What we do know is that Samsung’s Developer Conference takes place next month, so expect to see something foldable during that. 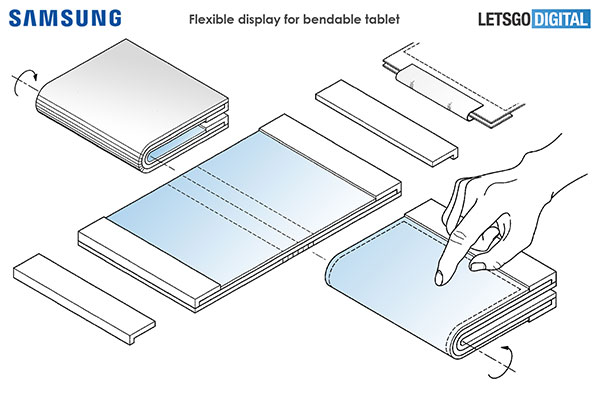 Running November 7th through 8th, we don’t expect the conference to see an announcement as such, but given the way DJ Koh loves talking about his foldable technology, we don’t imagine the whole event will go off without some sort of mention of the company’s next big, foldable thing.

We’ll be keeping our eyes out for information during the conference, so if Samsung does sneak a new smartphone or tablet into the world, you’ll know about it as soon as we do.