Fix Fortnite iOS Crashing And Loading Issue On iPhone Or iPad, Here’s How

When you’re playing games like Fortnite the last thing you want is any form of performance issue. Even worse is when it just plain refuses to load.

Unfortunately that’s exactly what some people are experiencing with the recently released 9.40.1 version of Fortnite for iOS. The update brought with it new content and weapons, but that wasn’t all it brought to the table.

It also appears the update isn’t working for everyone with users reporting that the game simply refuses to work following downloading the recent update.

If you have auto-updates turned on then the App Store will have already done its thing and you’re probably in trouble. But fear not, there appears to be a simple fix.

According to recent tweets by the official Twitter account it appears that a simple uninstall and re-install will fix all ills here. Of course that’s simple fix compared to waiting for Fortnite to be updated once more, so here’s how to go about applying it. 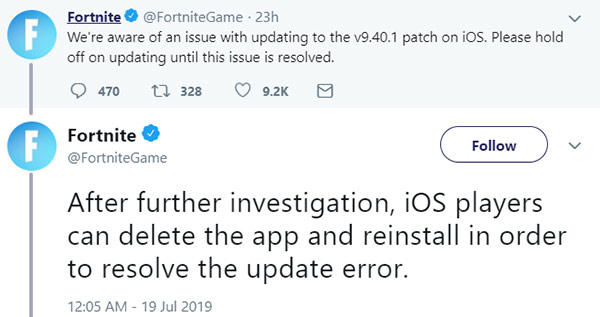 The really good news here is that you won’t lose any progress because everything is saved on Epic’s servers rather than your iPhone or iPad. Yes, having to download the game again isn’t ideal, but it’s better than the alternative.