As expected, Apple has just released the latest and supposedly greatest version of its mobile operating system to date, iOS 9. We say “supposedly” greatest as it seems not many people are able to get their hands on it just yet to test it out thanks to a “Software Update Failed” error message that is being displayed to a large percentage of iOS device owners trying to download the update. The error message is being presented to the user almost immediately after agreeing to the terms and conditions while performing an OTA update, with no more information other than “An error occurred downloading iOS 9”.

Apple prides itself on the fact that it tries to make each major software update available to as many devices as possible. It’s in the Cupertino-based company’s best interest to keep as many consumers as possible using the latest version of iOS on its devices, which includes the iPhone, iPad, and iPod touch. There doesn’t appear to be any additional information being provided about this download error at the moment, but we can tell you that it certainly isn’t discriminating against particular device types, with all of the aforementioned hardware experiencing the issue.

In addition to being experienced across all of Apple’s hardware, there are reports that the problem doesn’t appear to be localized, meaning that consumers all over the world are experiencing the same error message. Without having a full and official explanation from Apple we can only really take an educated guess at what the problem is here. The logical conclusion is that the hype surrounding the release of iOS 9 has drummed up so much interest in the firmware that Apple’s installation and authentication servers are being hammered from all angles, from all over the world, all at the same time. 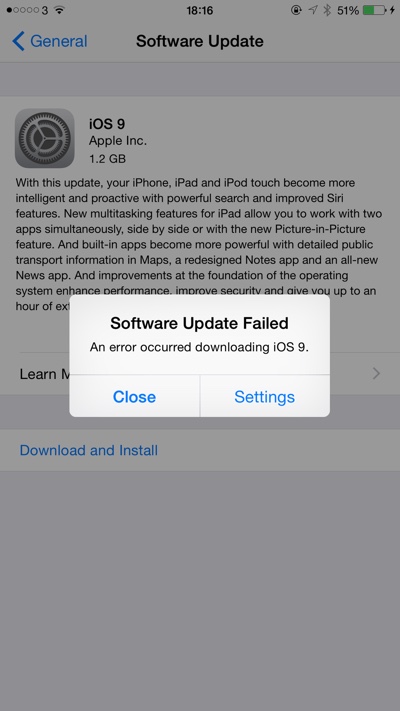 However, there’s also a very slim possibility that an issue of a larger nature is behind the problem. We’ve already witnessed Apple pulling the plug on the expected release of watchOS 2 today due to a “significant” bug being found in the Apple Watch’s operating system.

While there’s no specific fix for this, you can try following workarounds to update to iOS 9:

If you’re one of the lucky individuals who has managed to get passed the installation process at the first time of asking, then how is iOS 9 working out for you so far? Let us know in the comments section below.