Here’s how to fix the dreaded “black screen of death” issue when trying to jailbreak iOS 9.3.3 running on an iPhone, iPad or iPod touch.

Getting an error on a device while attempting to jailbreak is concerning enough, but at least with most errors, there’s some information attached to it to actually inform the user what the problem is. It then becomes somewhat easier to try and find a resolution. With that said, not all errors and issues are created equally, meaning that certain users have been experiencing what’s become known as the “black screen of death” while trying to jailbreak iOS 9.3.3. No error message; no additional information; nothing. All you get is a black screen with the device still powered on. 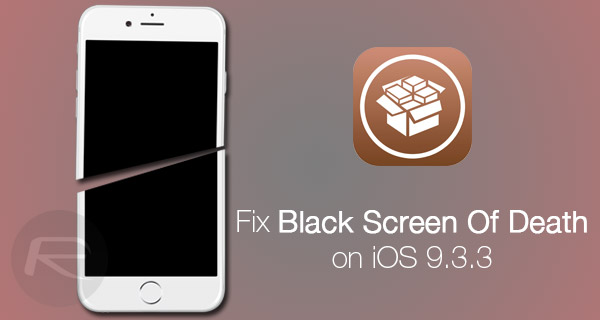 If that’s happened to you, just like it did to us, then you’re in luck as we have an easy way to fix this frustrating problem.

Step 1: If you happen to be experiencing the dreaded black screen of death on your jailbroken device, then you’re going to need to perform a hard reboot in the first instance to be able to access the device again. The majority of iOS device owners will by now know how to perform a hard reboot, but of course, we’ve put together a walkthrough on how to do it for those that may not have that knowledge: How To Hard Reboot / Restart Your iPhone, iPad Or iPod touch.

Step 2: You should now have access to the device again. The next step in the process is to make a full backup of the device using iTunes – which is of course good housekeeping – and then perform a full restore of iOS 9.3.3 firmware via iTunes. In order to do that, you’ll need to do a clean restore to iOS 9.3.3 to allow you to still be able to jailbreak the device afterwards. You can grab the iOS 9.3.3 IPSW for your specific device from here: Download iOS 9.3.3 IPSW For iPhone And iPad [Final Version].

Step 3: Now it’s time to jailbreak the device again. For instructions on how to use Pangu jailbreak for iOS 9.3.3, check out our jailbreak guide: How To Jailbreak iOS 9.3.3 On Windows Or Mac Using Pangu And Cydia Impactor [English]. Hopefully, this time your jailbreak will go smooth with no black screen of death-like issues.

Step 4: Once the device is successfully jailbroken, the final step in this process is to restore the backup of your device using iTunes. That should leave you with a jailbroken device with the same configuration as you previously had before starting this process.

As is generally the case with fixes for random jailbreak errors in the current jailbreaking climate, there’s no guarantee that this will prove successful every single time. We have personally ran through this process on a number of test devices that have encountered the dreaded black screen of death, and it has solved the issue each time for us, so the signs do look good for it being a universal solution to that particular problem.